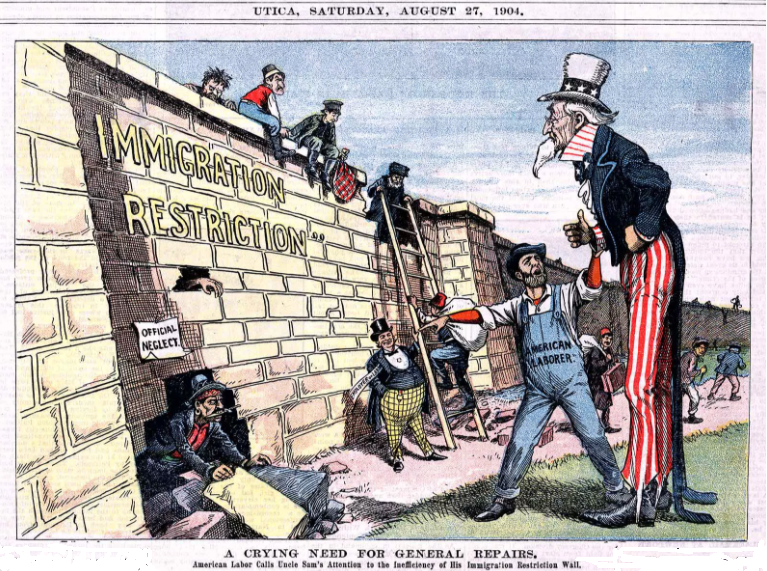 In many regards, the words President and Trump, when put together, become an oxymoron of sorts, because he rarely conforms to the common perception of what we, as Americans, consider to be “presidential”.  However, the fact that President Trump is bombastic and unorthodox should hardly be a surprise.  Those are probably the very personality traits that appealed to many independent voters who had grown tired of politics as usual, and ultimately resulted in Trump getting elected in the first place.

President Trump is also not a diplomat, which is why we really should not expect him to be diplomatic, and he is not at his core a politician, so we should really not expect him to follow traditional political protocol.

After all, who ever heard of a politician laying out a political agenda during a campaign that he or she actually intended to fully implement once elected?  Apparently, no one bothered to inform President Trump of this tradition, as he has actually set out to systematically implement virtually every promise he made on the campaign trail, including the good, the bad, and the ugly.  Indeed, he is treating his campaign promises like a business agenda rather than just the normal collection of soon-forgotten sound bites. 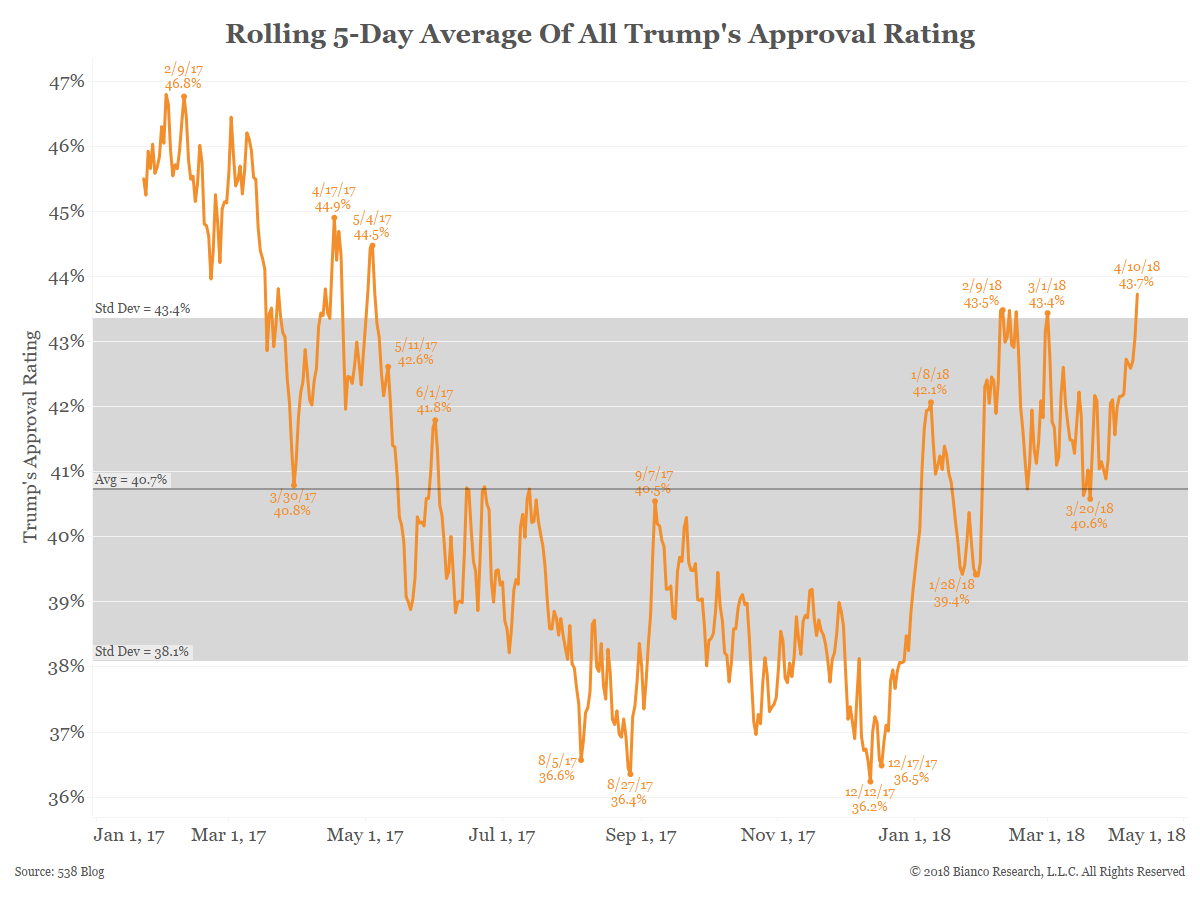 Perhaps even more surprising is that what seemed during the campaign to be the ravings of a reality show host starved for attention actually start to at least make some logistical sense when considered as part of Trump’s ambitious master plan to shake up the existing world order and actually place the interests of “America first”.

Remarkably, we believe that he actually means to pursue this global restructuring with only minor regard for the short-term costs.  Indeed, rather than being restricted in his actions and policies by concerns for the sustainability of the current global system, as American leaders have traditionally been, Trump almost delights in the prospects for the demise of these systems, and regularly questions the utility and viability of the underlying global institutions, including the World Trade Organization, and even the United Nations.

Make no mistake, it is a world order that was largely created under the guidance and leadership of the U.S., at least partially under the premise that American consumers would eventually become satiated with material goods, and thus that the U.S. needed to increase the world’s standard of living, so that foreign consumers could afford to buy American-made goods in the future.

President Trump is correct in asserting that the system is being taken advantage of by China, in particular, which still enjoys the trade and protectionist advantages granted to emerging economies, despite the fact that it is now the second largest economy in the world. 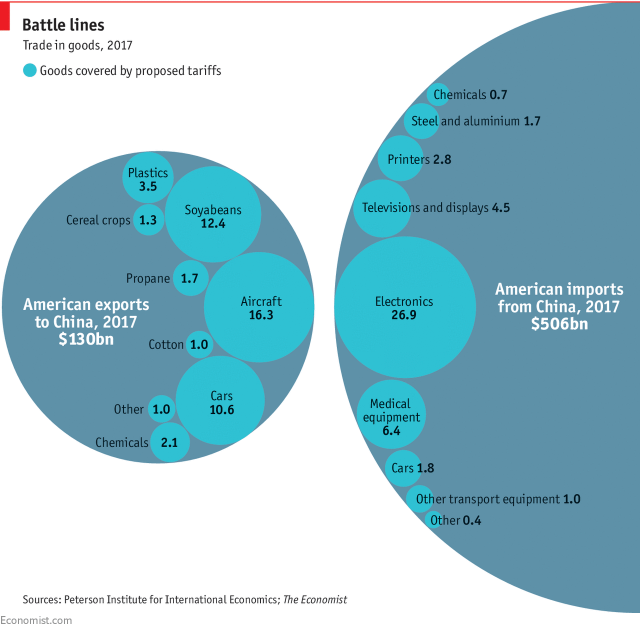 The good news is that there increasingly seems to be a method to Trump’s “madness”.  The bad news is that markets hate uncertainty even more than they hate bad news, and President Trump is doing what he has always done as a real estate developer, which is engage in high risk/high return strategies that fly in the face of the traditional status quo.

This is ramping up investor uncertainty and lessening the valuations that investors are willing to pay for risk assets like stocks (i.e. multiples compression), in addition to causing a dramatic spike in equity market volatility, which has been particularly jarring in comparison to the historically low volatility of last year (see below in green), which featured the lowest equity market volatility in fifty years. 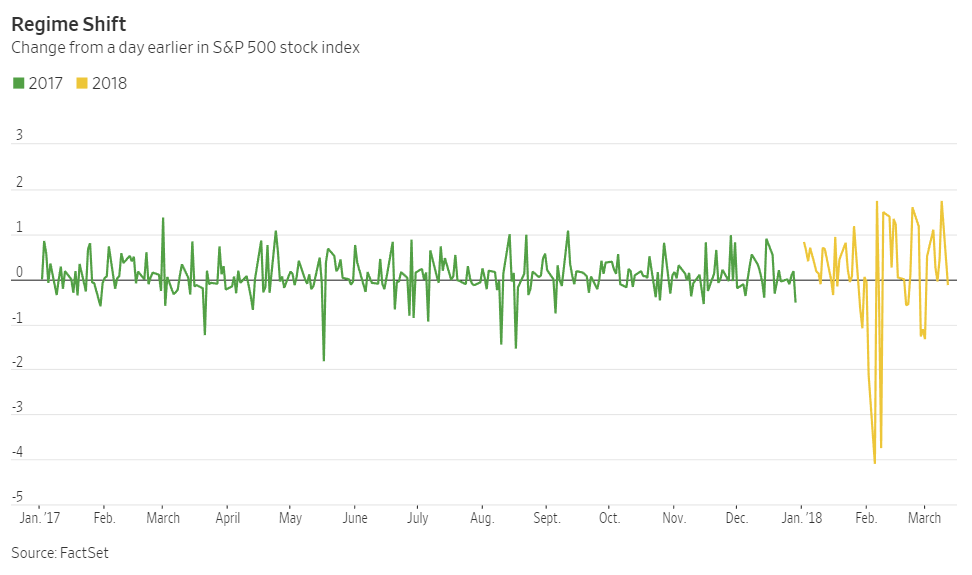 There is no doubt that, in 2017, the risk markets benefitted from the implementation of Trump’s “good” campaign promises (tax reform and deregulation).  It is equally clear that, in 2018, these same markets are being negatively affected by Trump’s efforts to implement his less investor-friendly campaign promises regarding trade and ultimately immigration (i.e. the “bad” and “ugly”).

Importantly, the Trump administration has strongly intimated that it is not particularly concerned if its threats of trade wars, etc. cause investors what he calls “a little pain” in the short term, as they presume that their trade strategy will ultimately be beneficial for both the economy and corporate earnings over the longer term.

Further heightening investor uncertainty is the fact that new Fed Chairman, Jay Powell, is not only raising interest rates and pulling liquidity out of the economy, but also because he appears much less inclined than have been his predecessors to use monetary policy to cushion investor losses.

It seems the “Fed put” is gone and the tightening autopilot is on, as illustrated by the fact that Powell remains fully committed to the Fed’s systematic raising of rates and reducing of money supply, despite the growing evidence that the synchronized global recovery may be in some trouble. 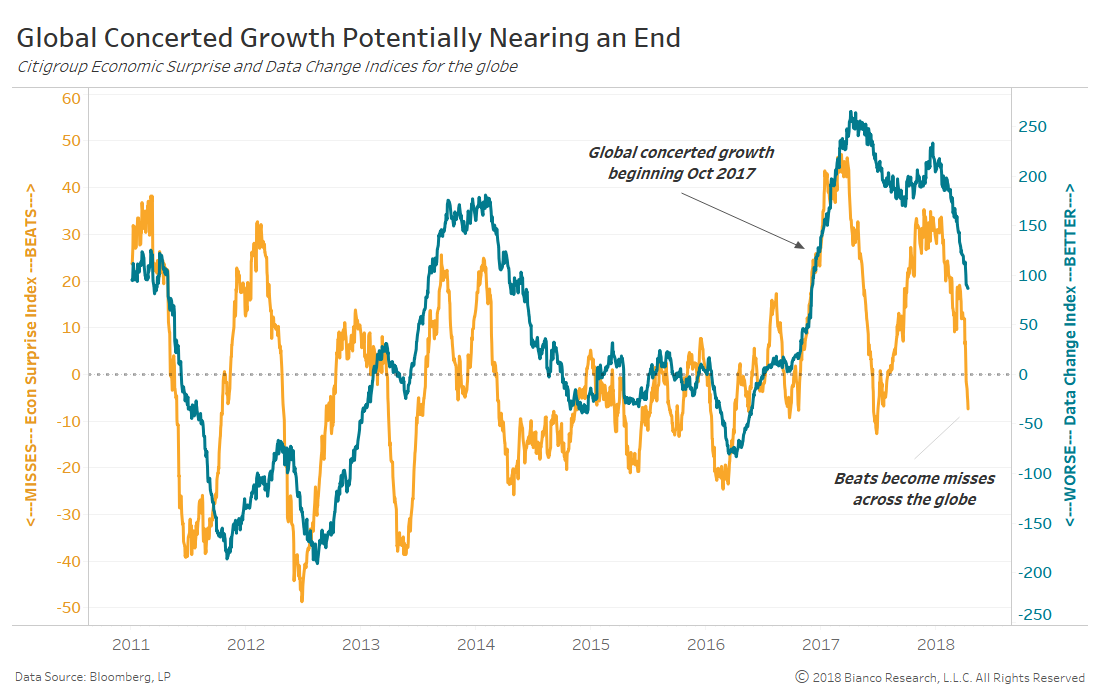 You can see this reflected in the above chart, which shows that nominal global economic data is still improving (readings above zero indicate continued expansion), but at a slower and slower pace, and that data is generally failing to meet economist expectations, and by increasing margins.

A closer inspection reveals a dramatic reduction in the growth rates in Japan and the European Union, a moderation of economic data in the U.S. and Great Britain, and a resurgence of negative data (shown by readings below the “zero-line” below) that hints at the possibility of an impending economic slowdown in Japan, Australia and Canada. 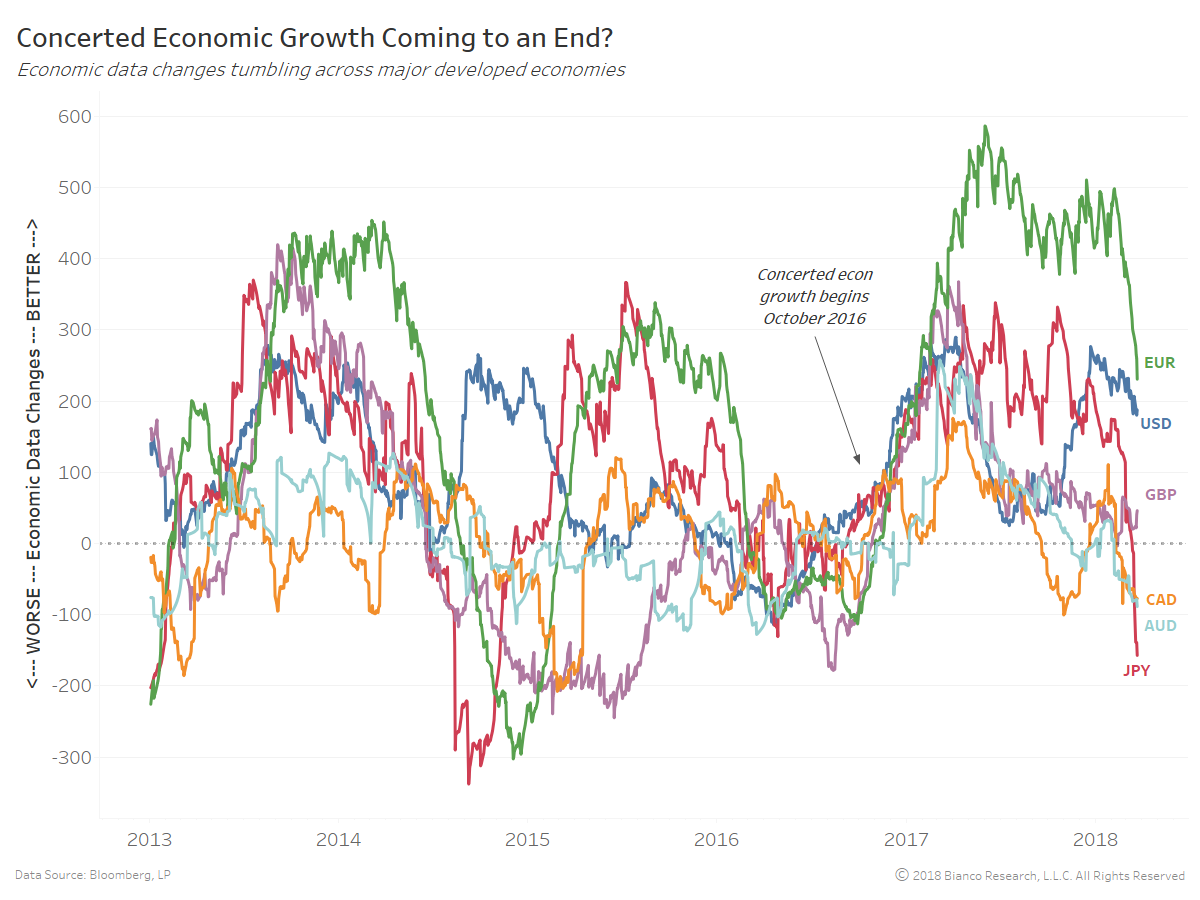 Frankly, when you consider the mix of higher interest rates, reduced money supply, slowing rates of global economic growth and the mountain of trade and tariff-related uncertainties, one could make an argument for just stuffing all of your money into a mattress and looking for a hole to crawl into, until some future time when things look less scary.

Throw on top of that the new military campaign directed against Syria, and its potential to pull the U.S. into a proxy war with Iran and/or Russia, and the seemingly ever-broadening array of political and legal scandals involving the White House, and it surely would feel comfortable to start stuffing the aforementioned mattress with both hands, and perhaps such an approach might ultimately even prove to be prescient.  However, history has shown that investors rarely make money doing what is “comfortable”.

Moreover, we would suggest that, despite this formidable array of bearish influences, there are still a variety of fairly compelling reasons to give the equity markets the benefit of the doubt, particularly since all of the aforementioned factors (aside from the military strike against Syria) are already well known to investors, and the fact that markets almost never sell off on the same news twice.

Indeed, the equity market’s ability to finish the quarter basically unchanged despite all of these fundamental negatives is most impressive, and a classic definition of a bull market is a market that won’t go down in the face of bad news. 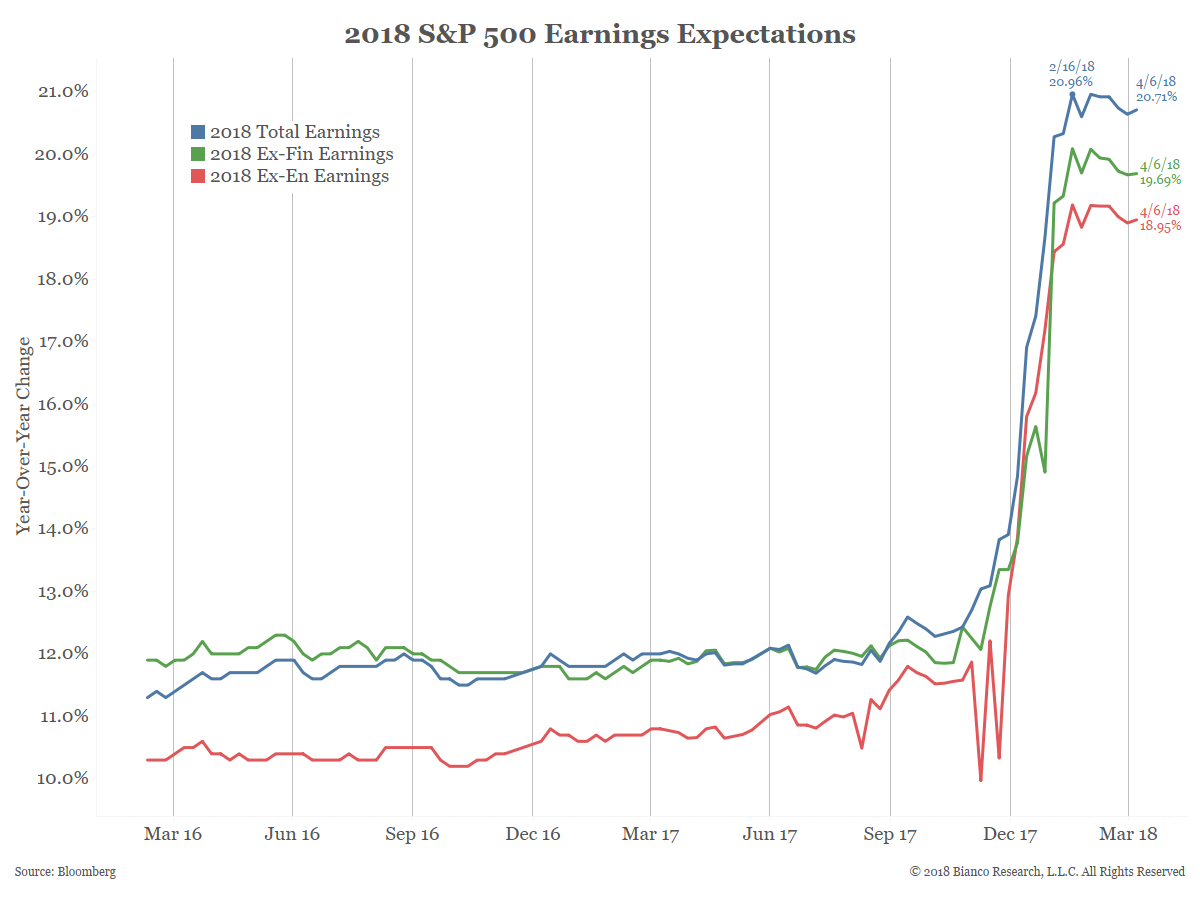 At the core of the bullish case for equities is tax reform, deregulation, and the extraordinarily positive impact that it is having on U.S. company earnings on both a nominal basis, where earnings are expected to grow at a pace of around 20%, and on a relative basis, where it looks like domestic earnings will overwhelm those of foreign competitors who do not have the benefit of the “good” elements of Trump’s political agenda. 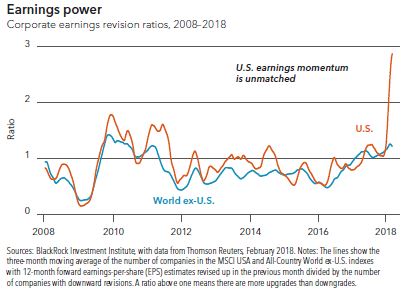 Of note, having such lofty expectations for earnings growth is a two-edged sword, as any earning disappointments are likely to be severely punished, and because stocks are unlikely to be rewarded for simply meeting these heightened earnings expectations.

However, largely offsetting this concern is the fact that the array of investor concerns addressed earlier in this writing have already depressed market multiples to an extent that current valuations are no longer expensive, particularly in light of these very optimistic earnings expectations.  Indeed, if you value the S&P 500 on expected earnings, it is only selling at a multiple of 16.4 times forward (i.e. expected) earnings, which is right at its historical average.

In addition, while interest rates are moving higher on a relative basis, they remain quite low on a nominal basis, and equity markets have historically supported higher than historical average valuations when rates are at similarly low levels.

Also encouraging from a contrarian perspective is that speculative froth has largely been removed from the equity markets, with the American Association of Individual Investors (AAII) sentiment survey showing more bears than bulls for the first time in two years. 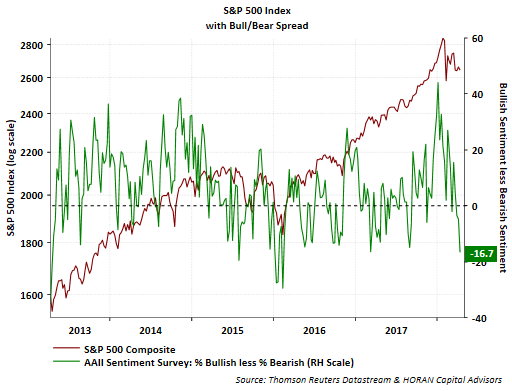 However, bearish sentiment is not limited to amateur investors, as illustrated by the sharp retreat in bullish sentiment (42.2%) among investment newsletter writers (as tracked in the latest Investor’s Intelligence poll, which shows the lowest bullishness since just before the elections).  Such a large number of bears suggests that most of the selling may have already taken place, and that there is a large supply of bears available to drive the market higher as they are converted back to bulls. 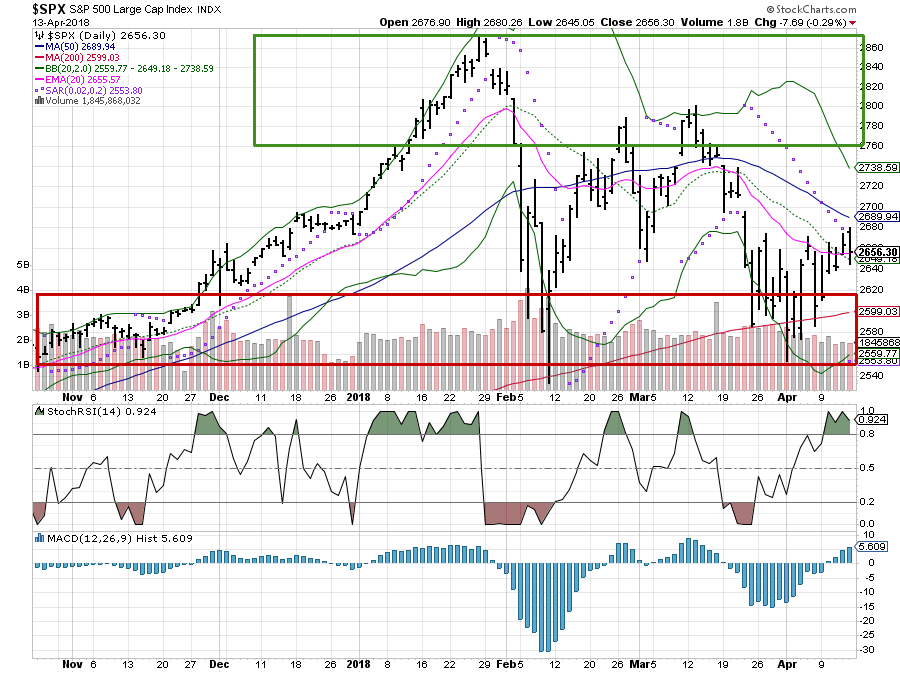 To explain, investors have been handsomely rewarded for buying stocks whenever price levels drop into the area of underlying demand, which is designated with a red box, and we expect for that activity to continue until such time when the markets sustain a breach below the bottom of that range.

The flipside is that investors have also been extremely well rewarded for selling whenever the market rebounds into the green box, which we expect to cause a significant supply of stock to come back into the market at those levels. We believe that this tendency is likely to make it quite challenging for the markets to break out to new highs.  While this may result in the broad market being mired in a trading range over the intermediate term, we believe that there will be many opportunities for gain through individual stock selection.

There is an old Wall Street saying that “Bulls make money and bears make money, but pigs get slaughtered”.  In other words, don’t “be a pig” and overstay your welcome in what may soon be the longest running bull market in American history.  At the same time, it can also be painful from an “opportunity cost” perspective to leave a bull market too soon.

In fact, according to research from Bloomberg, the final twelve months of the average bull market account for a full one-fifth of the bull market’s total return, and it usually takes the form of a parabolic move higher. 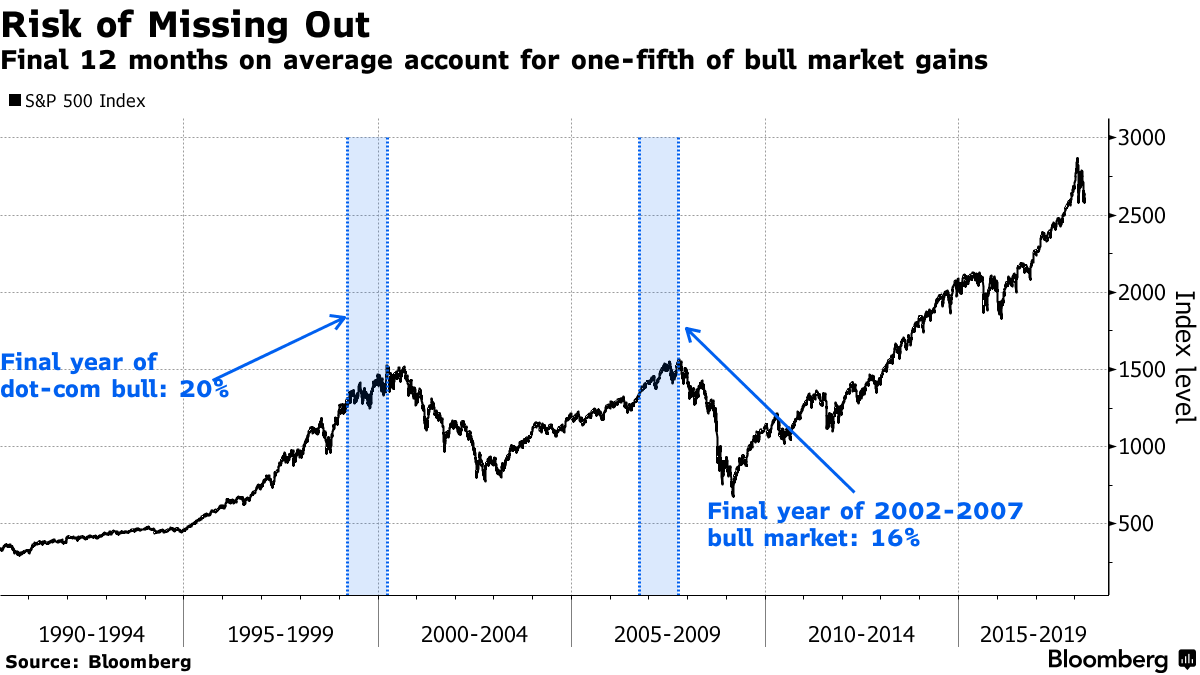 Indeed, such blow-off tops usually look very similar to the price action that we saw in the weeks leading up to January 26th of this year, so one must at least acknowledge the possibility that the ultimate cyclical top took place on that date.  However, while we certainly acknowledge that possibility, we think that this market still has some upside surprises before it is done.

As was noted in a recent Reuters interview, we suspect that Trump’s trade “bark” is worse than his trade “bite”, and that most of the jingoistic trade language will prove to be little more than posturing for upcoming negotiations.  We are actually encouraged by the news coming out of the NAFTA negotiations, and would be very enthusiastic if Trump’s recent comments about the U.S. potentially joining the Trans-Pacific Partnership (TPP) prove to be in earnest, as that is probably the most efficient way to deal with Chinese trade and intellectual property abuses. 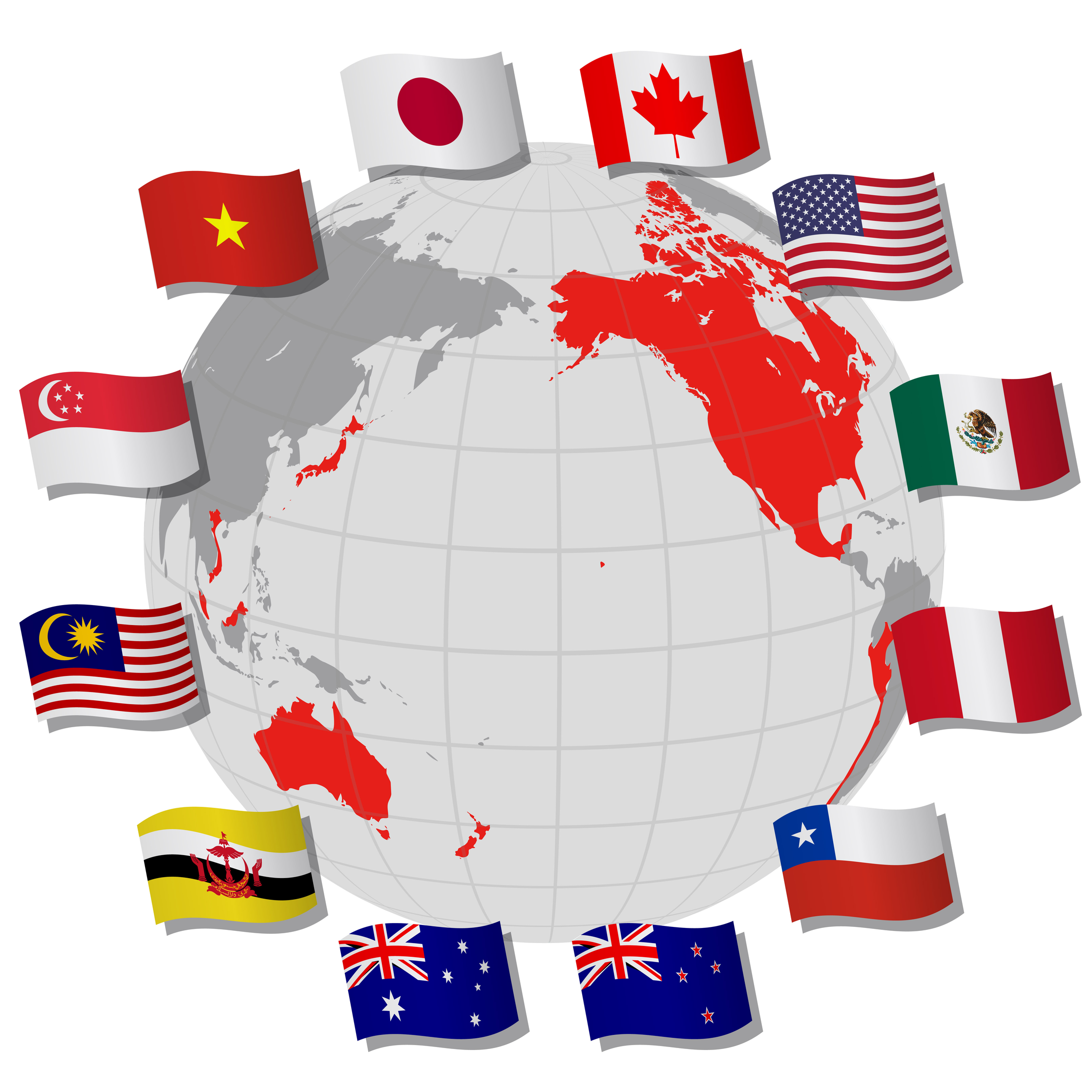 While trade will certainly remain an issue, it looks increasingly like it will be the course of monetary policy and the outlook for the mid-term elections that will hold the most sway over the capital markets.

Ultimately, the bull market in equities is like an old car that just had its shock absorbers removed by the Federal Reserve, and which President Trump is sending down a road that has a large and growing number of potholes, including a particularly challenging one in the form of the mid-term elections. Nonetheless, the car still has a strong engine and, in our opinion, still has enough fuel to take investors further down the road, as long as they are willing to tolerate a very bumpy ride.