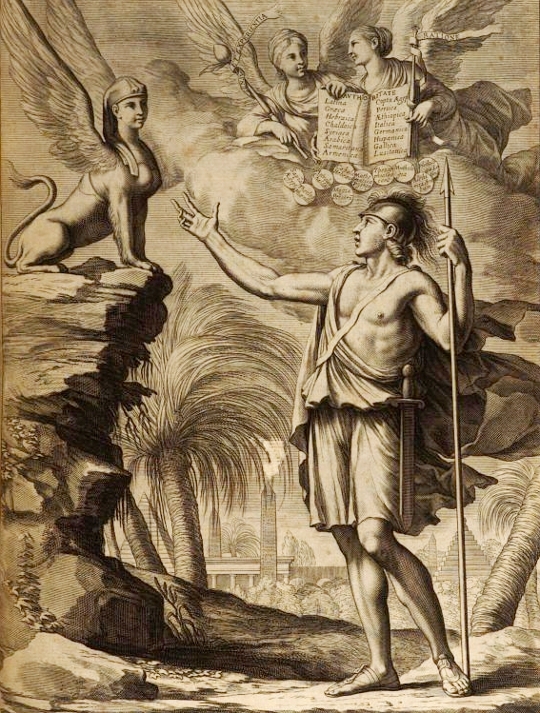 According to Greek Mythology, the road to Thebes was once blocked by a monster called the Sphinx that would not allow travelers to pass unless they could first answer the following riddle: “What animal walks in the morning on four feet, in the afternoon on two feet, and in the evening on three feet?”  Oedipus was the first to correctly answer that, “it is Man.  In childhood he creeps on hands and knees, in manhood he walks upright, and in old age he walks with the aid of a cane.”

Just as human beings go from crawling to using a cane over the various stages of their life, markets too have uniquely different characteristics as they transition from one stage to another, based on their age and maturity.

Importantly, since virtually all free markets are based upon the economic relationships between supply and demand and the human emotions of fear and greed, these stage-based characteristics tend to be common to all financial markets.  For the purposes of this writing, however, we will use examples taken from the equity markets.

History teaches us that markets peak at the point of maximum optimism, when virtually every potential investor is already fully invested, and bottom at the point of maximum pessimism, when the last potential seller finally capitulates and sells.  This is why successful investing is such a counter-intuitive process, as investors are often best served by adding to their investments when they are most terrified, and reducing their exposure to risk-assets when they are most optimistic and bullish.

More specifically, early-stage bull markets have great upside potential and very limited downside risk, as a result of the fact that virtually all of the bad news is already fully reflected in share prices, while virtually none of the good news is. 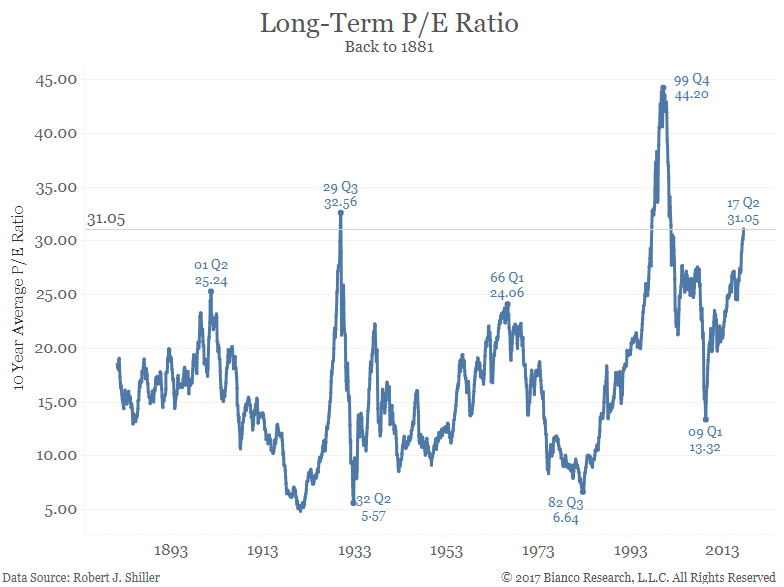 In regard to measurables, early stage bull markets are characterized by extraordinarily bearish (negative) investor sentiment and very low price-to-earnings (P/E) multiples, which combine to reflect an environment where virtually all potential sellers have already sold, and where investors can buy shares for a very low price relative to the earnings of the companies whose shares are being purchased.

Over the last 100 years, U.S equity investors have been willing to pay, on average, $16 of share price for each $1 dollar of company earnings.  In other words, if a company makes $2 per share of earnings, it would be reasonable for an investor to pay $32 per share (all other things being equal).  Stated yet another way, it would take 16 years for the earnings of the company to reimburse the investor for their purchase price.

In later stages of bull markets, investors are normally confident enough in a company’s future prospects to wait even longer to be reimbursed for their investment, with equity markets peaking on average at a price-to-earnings ratio of around 19 times earnings (a 19-year reimbursement period), and major stock market bubbles (like early 2000) ultimately peaking out at levels above 30 times earnings (a thirty-plus-year reimbursement period).

As you would expect, the exact opposite is true of bear market bottoms (a.k.a. the start of an early-stage bull market), where bear markets over the past 100 years have ended with an average price-to-earnings multiple of 7.6 times earnings (a 7.6-year reimbursement period).

In contrast, late stage bull markets have greater risk (because so much good news is already reflected in share prices) and, by definition, more limited upside potential.  As the old market saying goes, “Trees don’t grow to the sky.”

It is important to emphasize that high P/E multiples are indicative of having reached the later stages of a bull market cycle.  However, high valuations are rarely if ever the catalyst for a change in market trend.  Similarly, markets do not normally bottom just because they have become too inexpensive.  Instead, a separate catalyst is normally required.  For example, an equity bear market is usually catalyzed by a recession or by the Fed becoming overly restrictive with monetary policy (rates get too high or money supply too low). 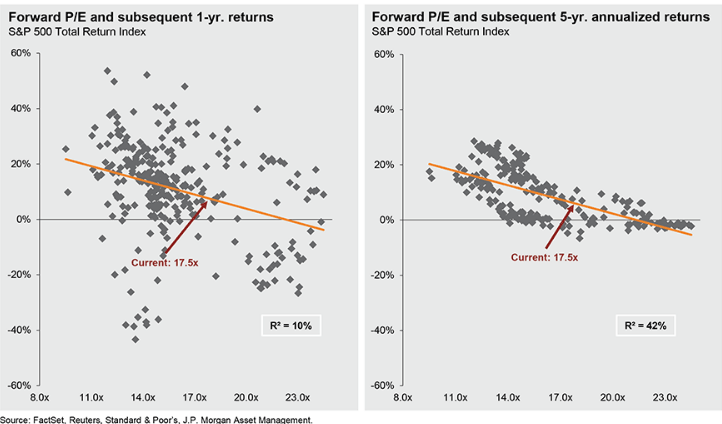 However, as is illustrated by the scatter-plots, valuations can tell you much about potential risk and potential return.  When valuations have been low (horizontal [X] axis), the frequency of positive market returns has historically been very high and the nominal returns (vertical [Y]) axis) have generally been quite strong.  In contrast, when valuations have historically been high, the frequency of negative returns has picked up dramatically, the nominal upside potential of the market has generally been muted, and the risk of significant downside increases.

Since money is fungible, these same relationships tend to be consistent across the globe, which is one of the major reasons why we have been such staunch proponents of increasing exposure to the foreign equity markets, where valuations are much lower than they are in the domestic markets, and where earnings-per-share growth has literally been exploding to the upside.  (In the earnings growth chart, domestic earnings growth is in blue, and developed foreign and emerging foreign earnings growth rates are shown in green and gold respectively). 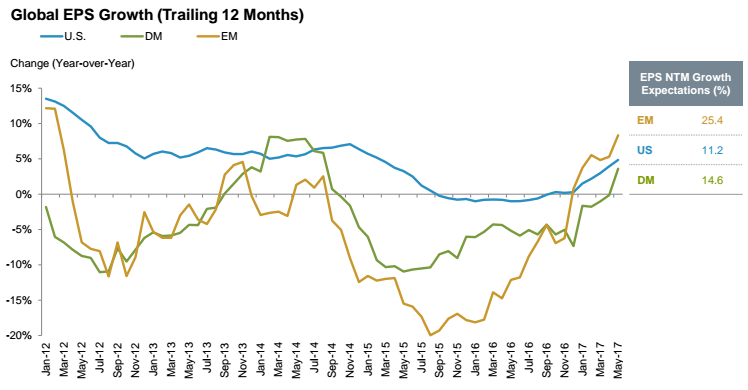 Of course, market valuation is only one of the factors that differentiates between the different stages of bull and bear market cycles.  Another equally definitive factor is sentiment.

Indeed, one can make an argument that sentiment may be an even more valuable measure, particularly when identifying the end of bear markets, because they are almost always tied to capitulative sell-offs and spikes in the level of the “fear indexes” like the VIX, which essentially measures the price that investors are willing to pay for insurance against market losses.  When this index breaks above the 40 level (illustrated with a “dot”), it has historically been an effective indicator of a significant and sustainable capitulation bottom. 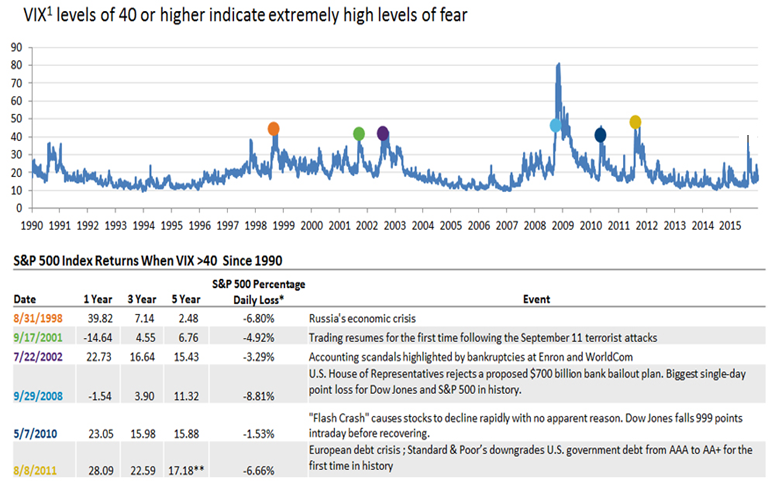 Indeed, if you average the returns of the Standard & Poor’s 500 Index over the twelve months following each of these surges above 40 in the VIX, they average an impressive 16.3% return.

It is thus a good thing that, at least so far, it has not automatically followed that the inverse holds true (i.e., that a very low VIX reading suggests an immediate and violent retreat in equity prices).  Even so, we do find the persistent nature of these historically low levels of volatility to be a point of some concern. After all, we are currently witnessing the lowest sustained readings in the history of this “fear index.”

This concern may be particularly justified when you consider these historically low volatility levels against a backdrop of extraordinarily high valuations.  When combined, they tell a story of complacency and investor overconfidence, which is very indicative of a bull market that is entering into its later stages.  It is also a warning sign, as complacent markets and overconfident investors have historically not fared very well when confronted with a negative catalyst. 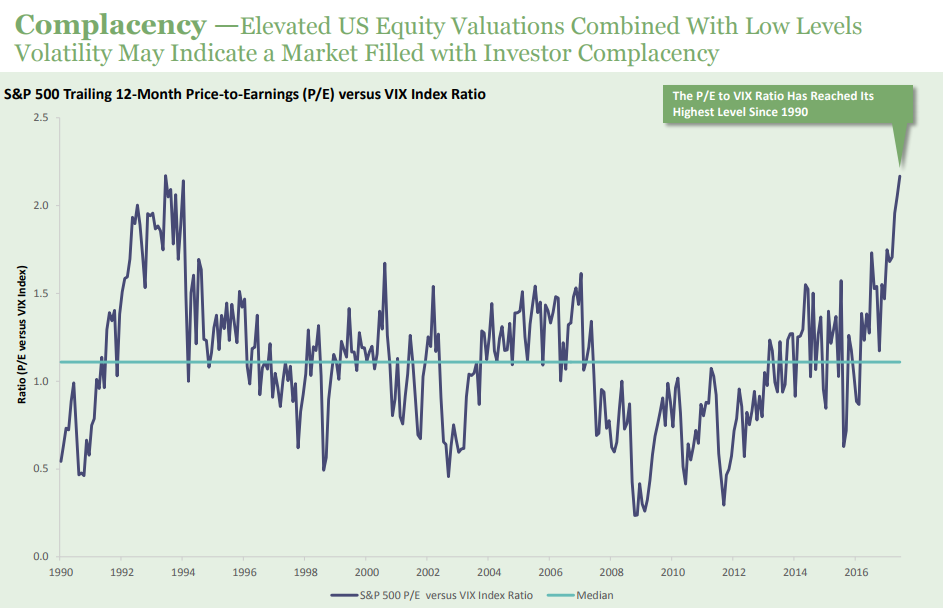 One of the elements that make this lack of volatility so extraordinary is that it is almost universal across asset classes.  Whether it be domestic, emerging market, or industrialized-country foreign equities; Treasury, investment-grade, or high-yield bonds; or even commodities, volatility is at historic lows, and no one can fully explain why.

It could be attributable to the trillions of dollars of central bank liquidity that is sloshing around the financial system, which should soon start to shrink.  It could be because of the surging popularity of index investing and buy and hold strategies, which generate much less trading and do not even attempt to differentiate between a “good” security to own and a “bad” one, which further reduces trading-related volatility.  It could be because “big data” and algorithmic trading allows computers to react more quickly than can human investors, and that this allows for a more gradual changing of market opinions.  It could even be that the financial crisis and all of the government interference in free market pricing has somehow changed markets in ways that we simply don’t yet fully understand.

An important thing to remember about volatility is that it has traditionally had a very close correlation with the degree of investor consensus.  When the market is fairly equally split between bulls and bears, volatility tends to be quite high, as both camps fight for control of the market trend. 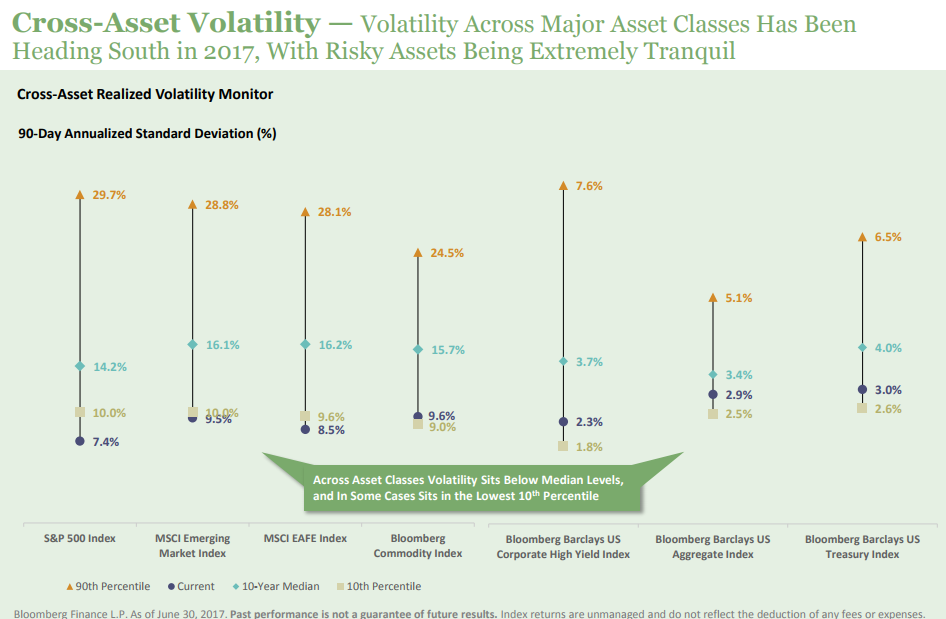 Low volatility markets tend to be indicative of a strong consensus in the market, as almost everyone is of the same opinion.  This suggests that you may be nearing the end of a trend, as you are at a point where you are about to run out of either new buyers (newly bullish investors) or sellers (newly bearish investors).

As such, this low volatility provides a warning sign for equity investors on two levels.  The first, as noted above, is that the market may be running out of bears that can be converted to bulls, thus bringing new cash into the stock market.  The second is that there are a variety of “moral hazards” associated with low volatility markets.  To start with, low volatility causes investors to lose their fear of loss which, in turn, encourages investors to invest in riskier, albeit potentially higher returning, investments, and to increasingly invest borrowed money (a.k.a. leverage).

While we are not anticipating such a dramatic outcome, it is noteworthy that, as was just pointed out by J.P. Morgan analyst Marko Kolanovic, these risk-parity strategies share much in common with the “portfolio insurance” strategies that greatly exacerbated the size of the 1987 stock market crash.  However, it is very important to keep in mind that, in 1987, interest rates were very high and moving even higher, as Fed Chairmen Volker and then Greenspan aggressively battled against hyper-inflation, which was a major catalyst for the decline itself.

Granted, the Federal Reserve is currently preparing to start gradually selling off its multi-trillion dollar portfolio of government debt, which should push up long-term rates, while they are simultaneously increasing short-term rates by changing the Fed Funds target.  However, this process is starting at a time that features some of the lowest interest rates in U.S. history, and we think that is a very important difference. 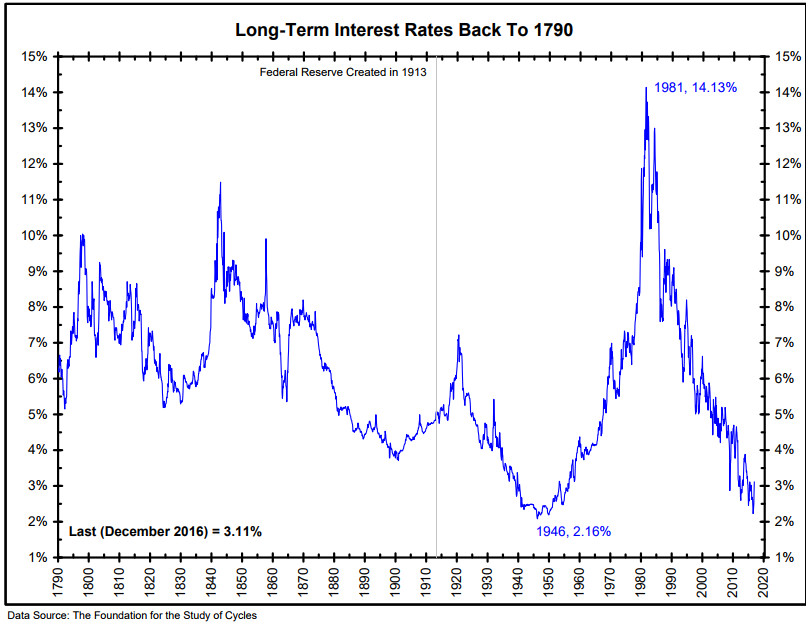 Regardless of the cause of the aforementioned low-volatility phenomenon, one of its very visible implications is that most of the global markets have not experienced even a modest decline at any point in 2017 and, by most accounts, they are probably overdue. 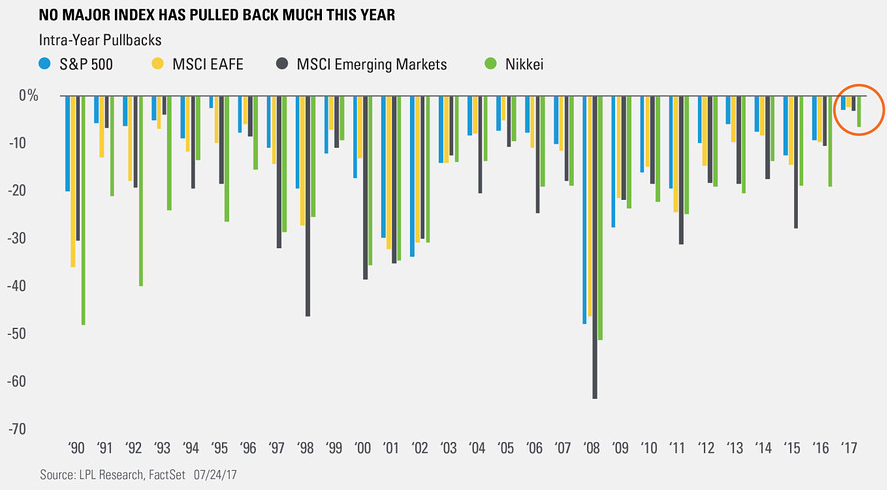 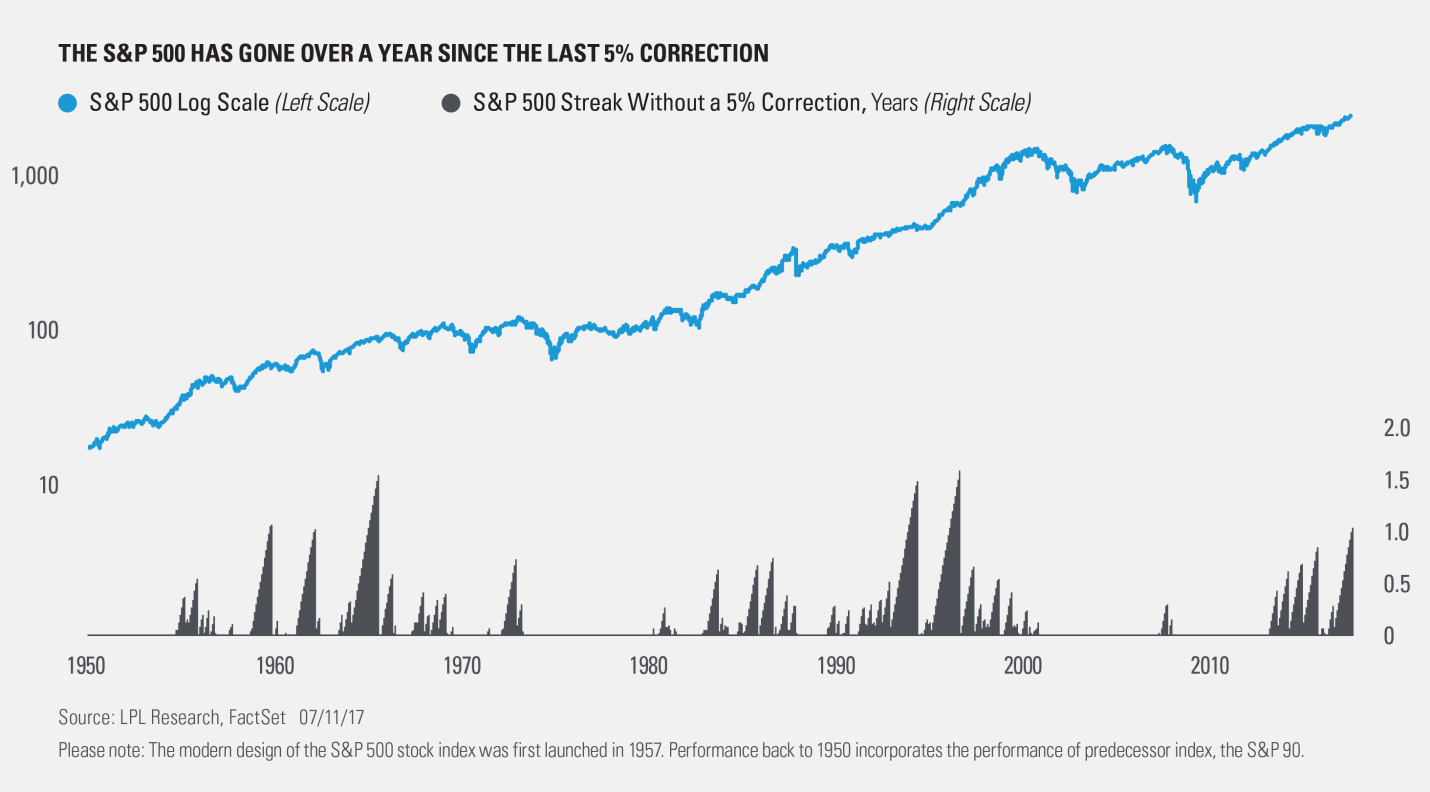 As we regularly repeat, the past is not necessarily prelude.  However, seasonal patterns do suggest that, if a correction is forthcoming, it would not be surprising if it were to take place over the next several months, due to the well-established seasonal tendency for the equity markets to give up some ground between August and mid-October. 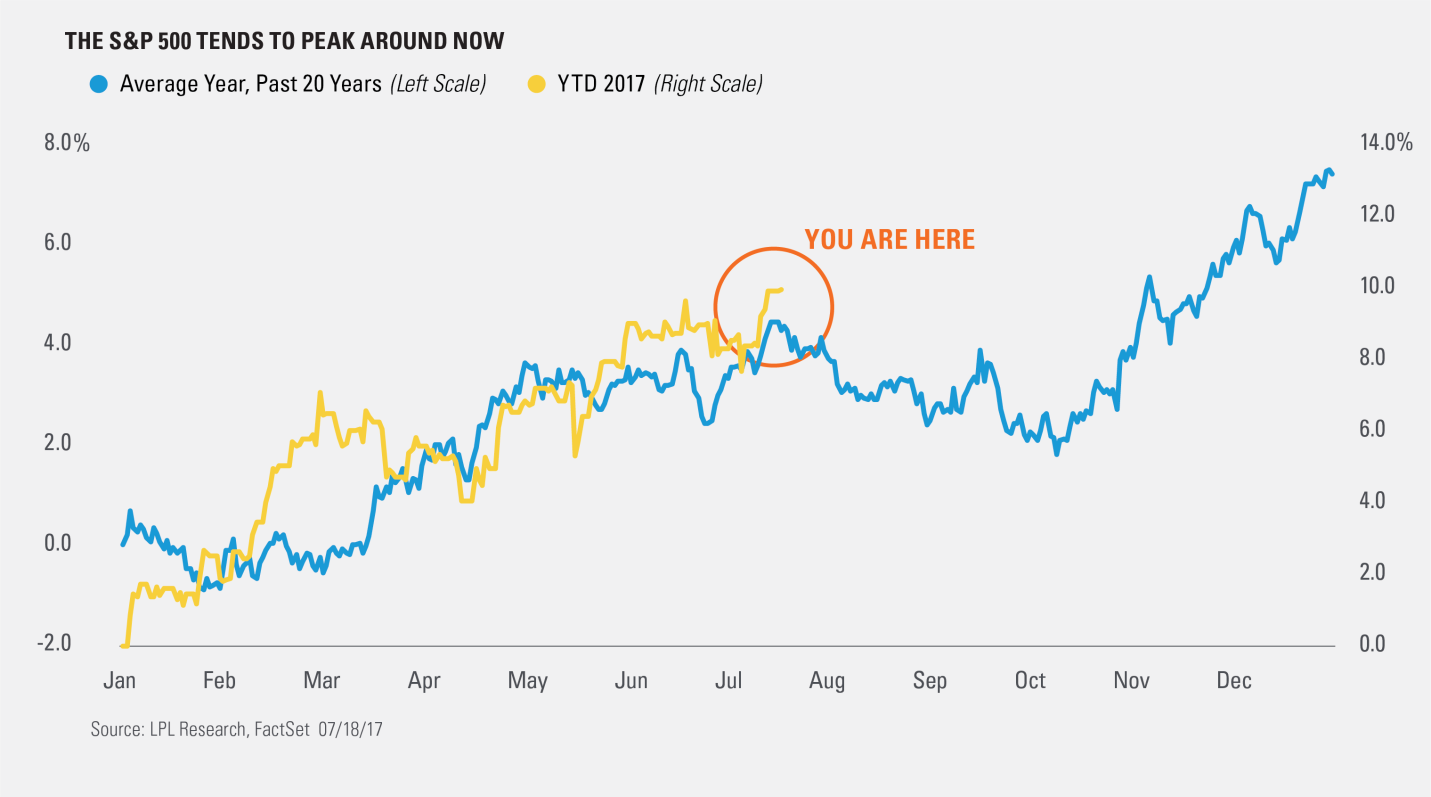 We do believe that the equity markets are overdue for a short-term correction, which should be very healthy, as it would help to address many of the complacency-related concerns noted above.

However, just like a baseball game, you never know ahead of time how many innings there will be.  It could be only nine, and it could be fifteen or even twenty.  You just never know.  That being said, we do see a variety of reasons to “stay in the game”.  To start with, even if this is the later stages of an equity bull market, it is usually the last stages of a bull run that produce the most dramatically positive returns.  In addition: 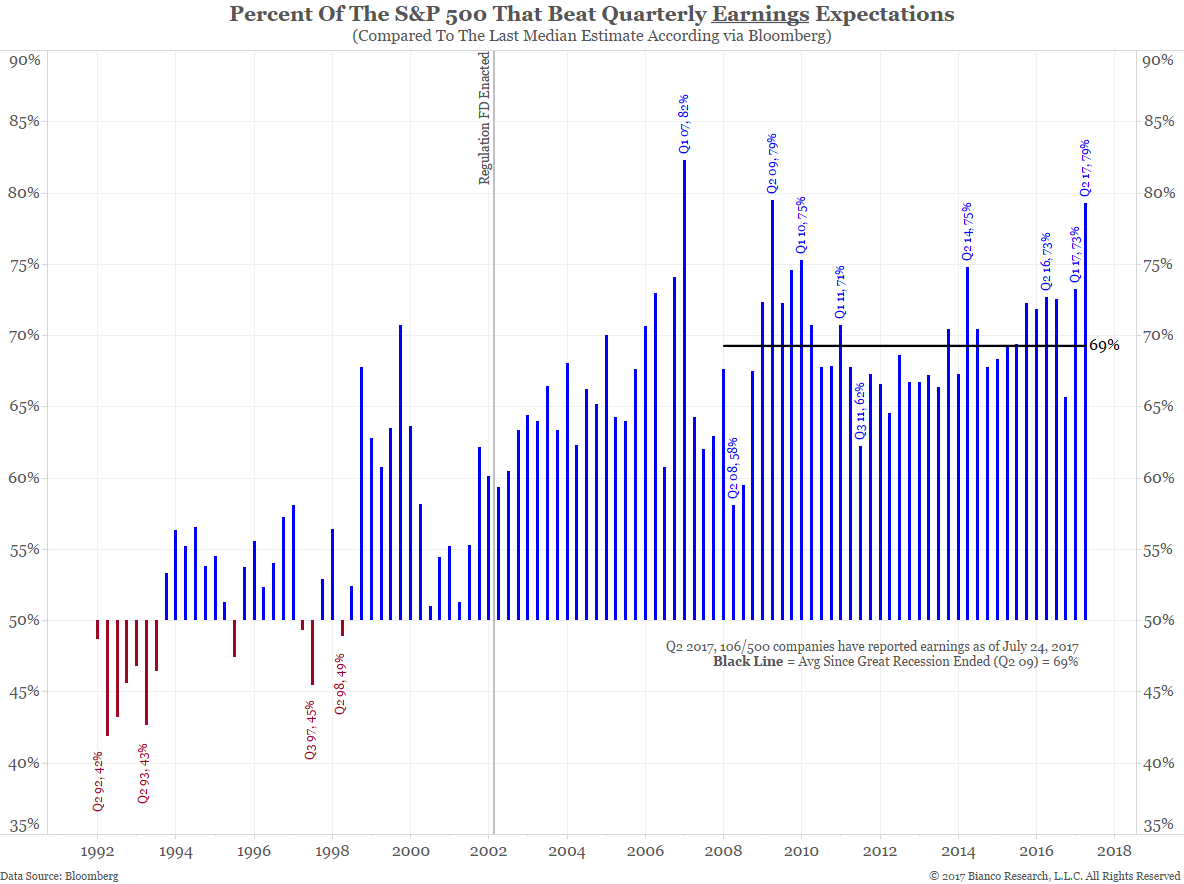 All things considered, the most prudent path seems to be to stay the course (but with a greater allocation to foreign markets), to avoid complacency at all costs, and to remain on the lookout for a tired old man walking with a cane.