> Per Stirling Capital Outlook May 2018

Per Stirling Capital Outlook – May 2018 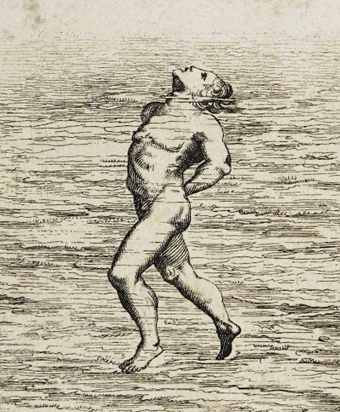 Warren Buffett has long been a great source for market perspective that is both pithy and insightful, and one of his very best adages is that, “only when the tide goes out do you discover who’s been swimming naked”.  In this instance, it is the tide of monetary liquidity that is “going out”, and some important “swimmers” are already getting exposed.

Most recently, latent economic problems in Argentina and Italy have been laid bare by this receding of the monetary tide, and they may be just the first in a long line of swimmers to be exposed, as many countries and companies alike have gotten away with fiscal profligacy in the post-crisis environment of quantitative easing and near zero percent interest rates, and that accommodative monetary environment is now being actively reversed.

In our opinion, this slow withdrawal from the extraordinary levels of monetary and fiscal influence that has been pervasive in the capital markets since the onset of the financial crisis is already starting to produce what we expect to be profound and extraordinary changes across the global macroeconomic landscape.

Indeed, what is at issue is the very sustainability of the coordinated and synchronistic global economic recovery, which is now clearly in question.  While economic data in the U.S. (USD) is holding relatively stable in the face of higher domestic interest rates and shrinking monetary liquidity, the same cannot be said of the European Union countries (EUR) or the countries in the Pacific Rim (APAC), where data is not just slowing, but is actually starting to indicate the potential for an impending economic contraction. 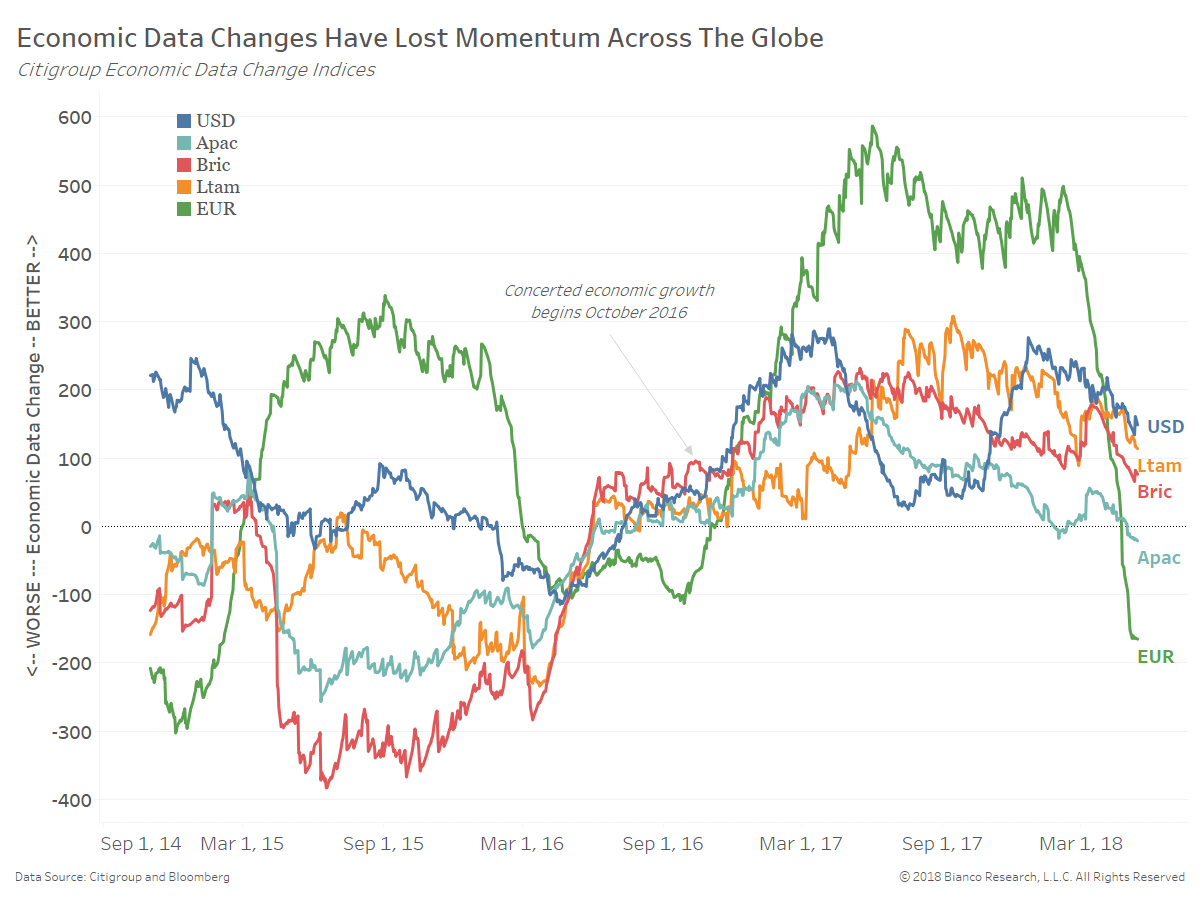 The largest emerging markets (Brazil, Russia, India and China-BRIC) are also starting to slow and are increasingly suffering under the weight of a stronger U.S. dollar, as most of their external sovereign debt is dollar-denominated thus increasing their indebtedness with each increase in the value of the dollar.  Of the world’s emerging markets, the economies of most Latin American countries are holding up better than are their emerging market peers despite the ongoing chaos in Argentina and Venezuela. 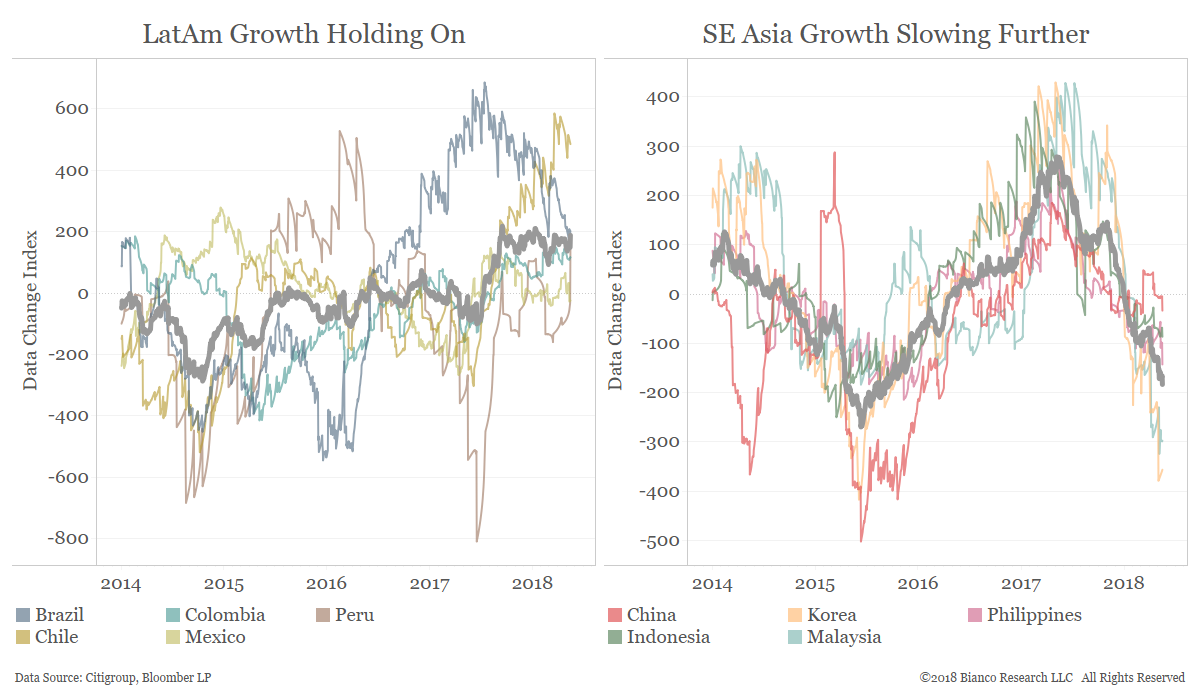 We suspect that the existence of suddenly divergent economies is due to the fact that the U.S. was able to generate what physicists would call “escape velocity” (i.e., the lowest velocity that a body must have in order to escape gravitational pull) by being both very aggressive and relatively early in its monetary and fiscal response to the financial crisis.

This is in sharp contrast to the remainder of the world whose slow and initially modest response was sufficient to lift their economies off of the launching pad, but potentially insufficient to sustain themselves against the “gravitational pull” of higher interest rates and quantitative tightening.

Indeed, we suspect that the recovery in the U.S. was a significant catalyst for the broader global recovery and we are somewhat concerned about the potential for a slowdown, particularly in Europe and Japan, becoming a significant drag on the domestic economy.

There is a caveat to this rather cautious perspective, which is that there is a well-documented problem with how the U.S. makes seasonal adjustments to its first quarter data that normally makes the quarter look much weaker than it turns out to be with the benefit of hindsight.  While this seasonal issue is not as well documented in overseas economies, there is some evidence that it is a more global phenomenon, which at least allows for the minor possibility that the weakening trend in economic data is only transitory. 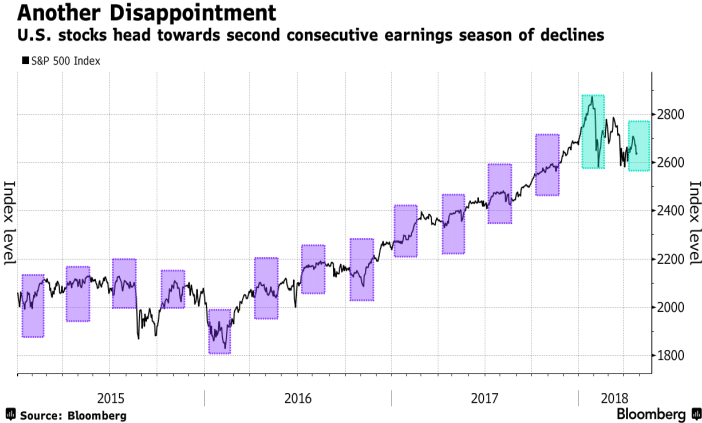 When questions about the synchronized status of the global recovery were combined with the prospect for progressively higher interest rates and the fact that, for two successive quarters, equities failed to rally in the face of truly extraordinary growth in corporate earnings, it had a dramatic impact on investor psychology. 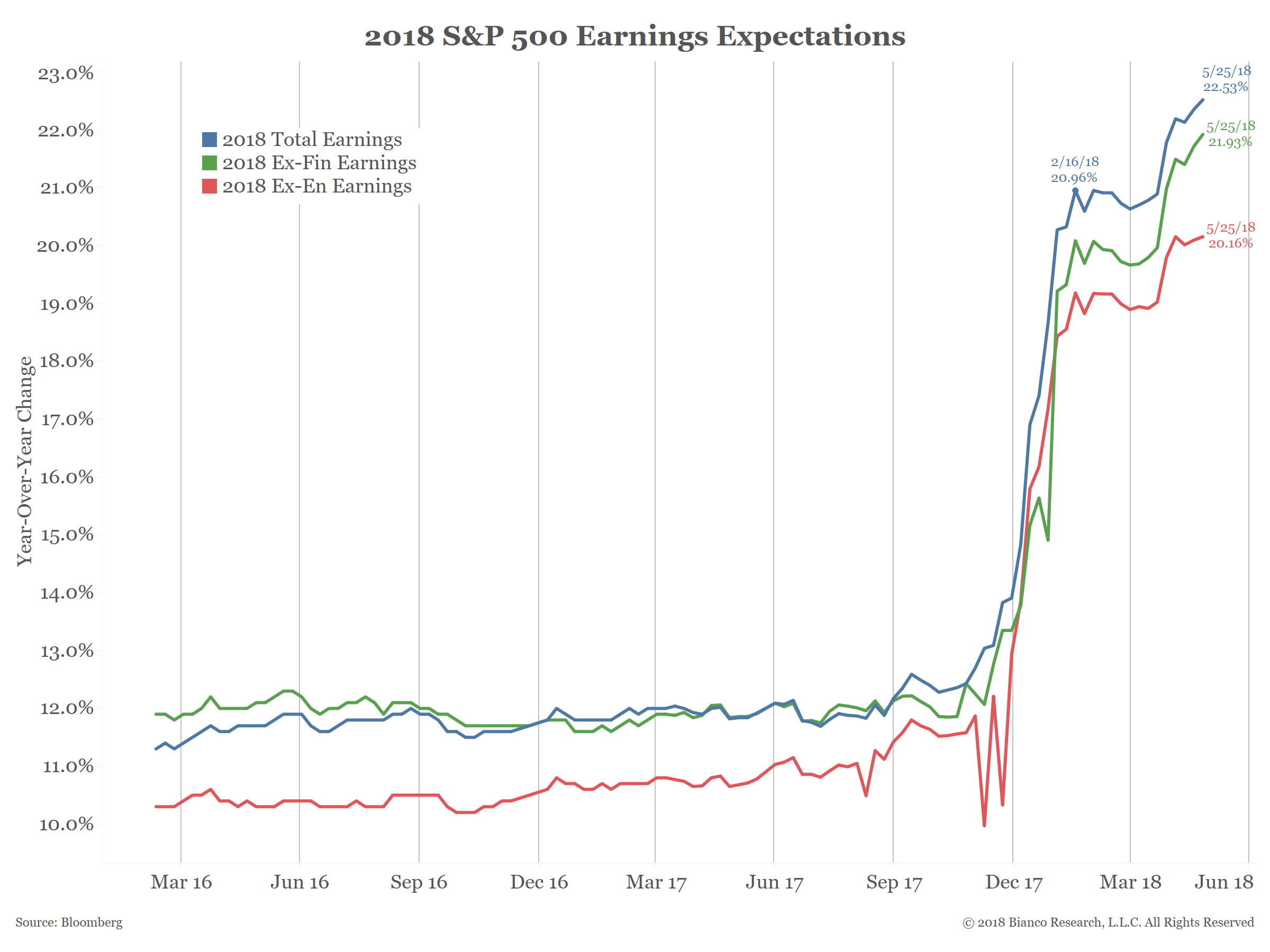 We can see this impact in measures of sentiment, in internet search results and in the reduced value that investors are willing to assign to each dollar of corporate earnings, which is reflected in the significant drop in the forward-looking price-to-earnings (P/E) multiple of the S&P 500 Index from an eight-year high of 23.5 times earnings in January to a very modest estimate of around 17 times earnings today.

The diminished value being assigned to corporate earnings was further exacerbated by the very restrained guidance being offered during earnings-related analysts calls, which we attribute largely to trade and protectionist-related uncertainty.  This contraction in earnings multiples has been interpreted by many analysts as a sign that the markets are sensing “peak-earnings”, which many view as a precursor to the end of the bull market in equities. 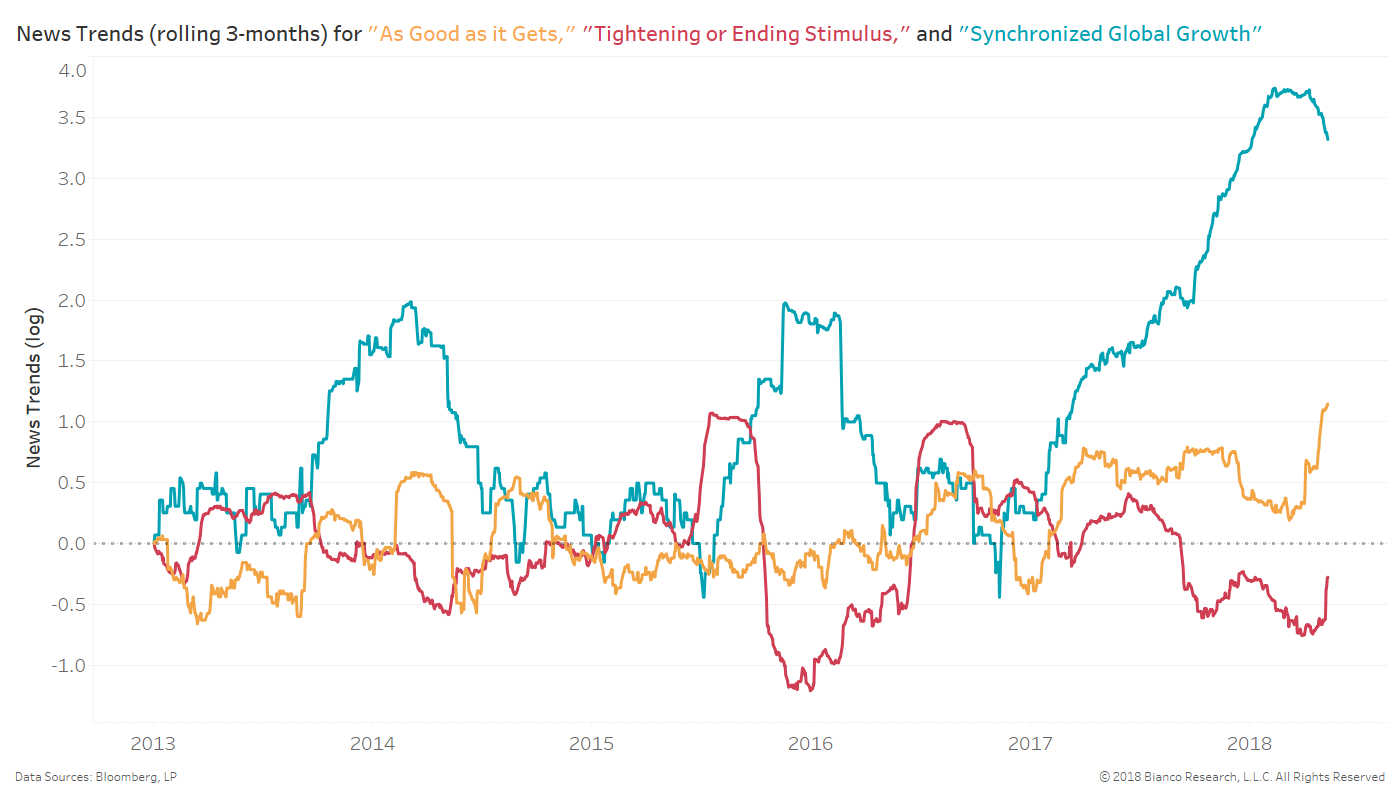 As noted, you can see this change in investor psychology reflected in internet search results.  Searches related to “synchronized global growth” are on the decline, albeit from still lofty levels, while search terms like “as good as it gets” and “tightening or ending stimulus” are increasing in popularity. 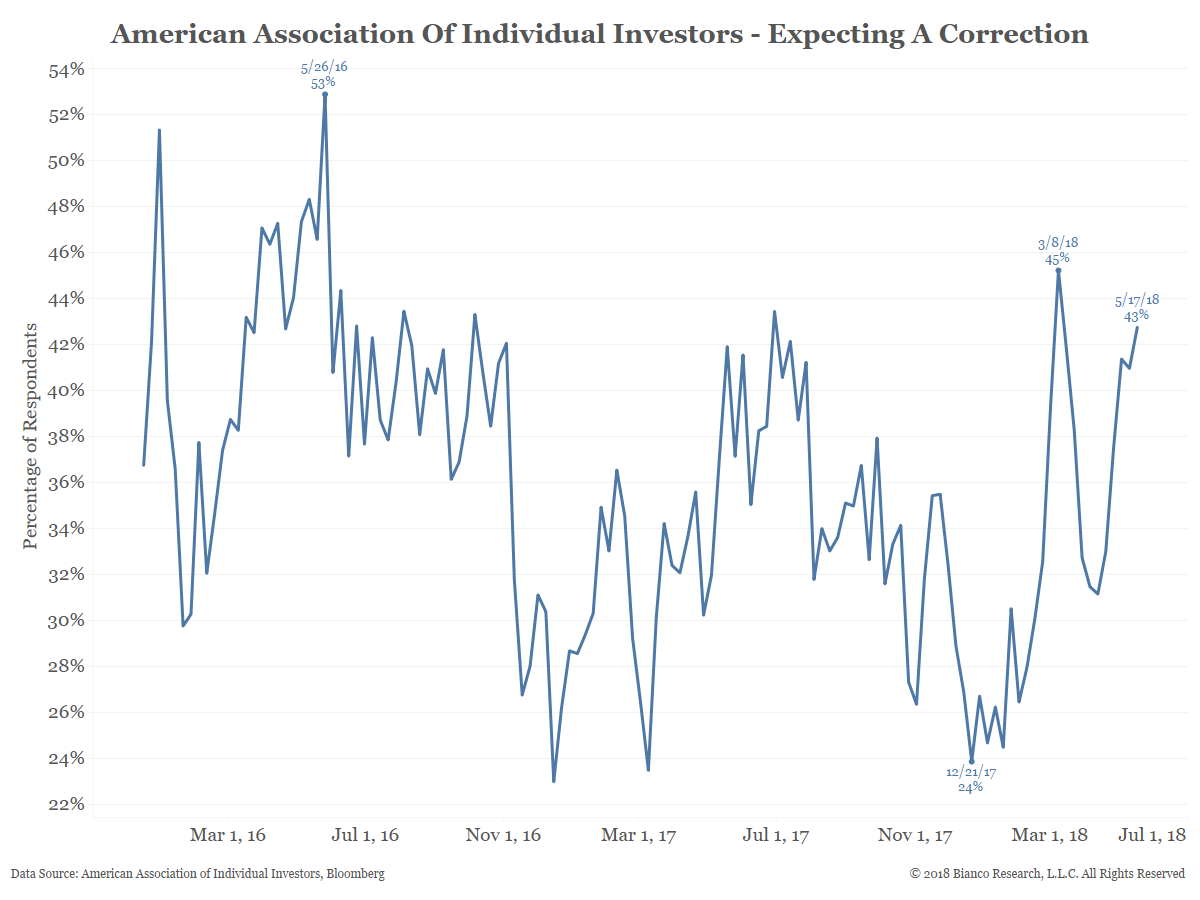 You can also see this reflected in sentiment gauges like that of the American Association of Individual Investors, where 43% of respondents are expecting a stock market correction of at least 10%. 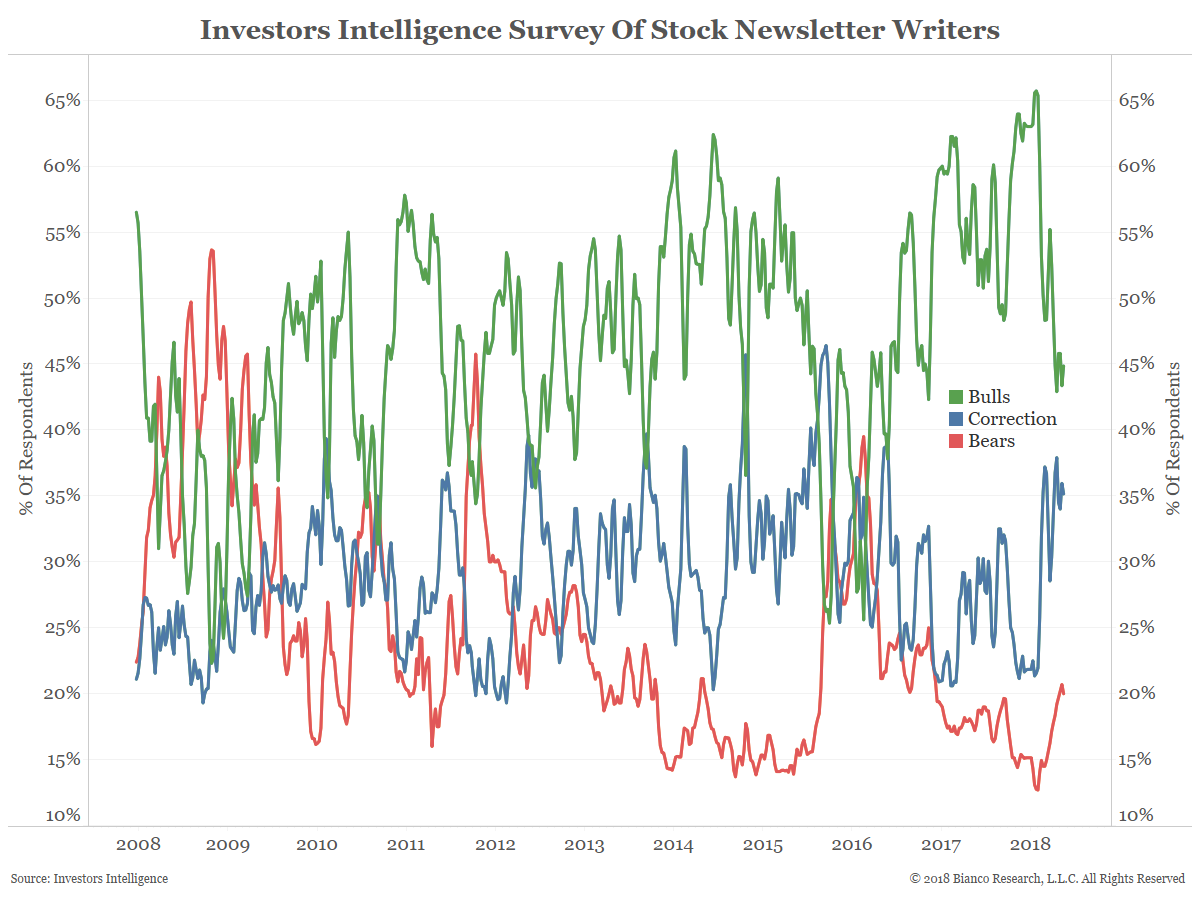 This cautiousness is further affirmed by the Investors Intelligence survey of investment newsletter writers, which just experienced a greater than 20% decline in the percentage of bullish commentators.

From a contrarian perspective, we view this surge in pessimism to be quite bullish, as it suggests that cash is building up on the sideline that can be used to power a future rally.

Importantly, we continue to believe that it will be essential for the markets to accumulate significant levels of pent-up buying power (i.e., sideline cash) before attempting another assault on the all-time highs, as we expect for large quantities of stock to come up for sale each time that the market attempts to rally through the green-shaded area of the chart. 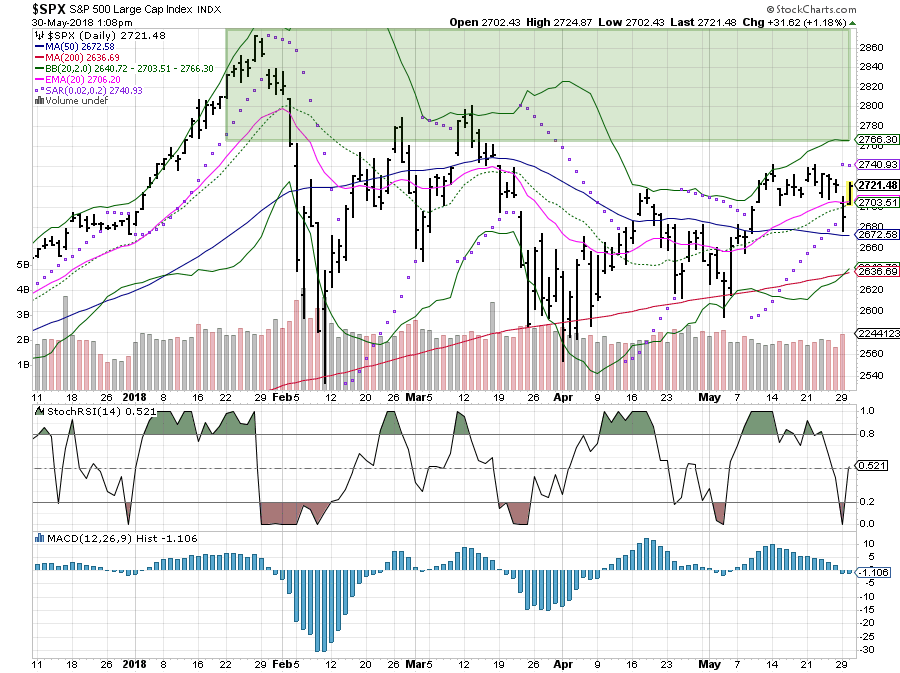 Indeed, we believe that the sustainability of any rally will largely depend on whether or not there is enough pent-up buying power to absorb all of that selling pressure which, at this time, remains a pretty tall order.  This is why we believe that the most likely scenario is still for the major domestic stock indices to remain mired in a trading range until proven otherwise by either a break above the January highs or a break below the February lows.

In the meantime, we are not so concerned by the current speculation about “peak earnings”, as we believe that last year’s tax cuts will likely support progressively higher earnings through the remainder of 2018. 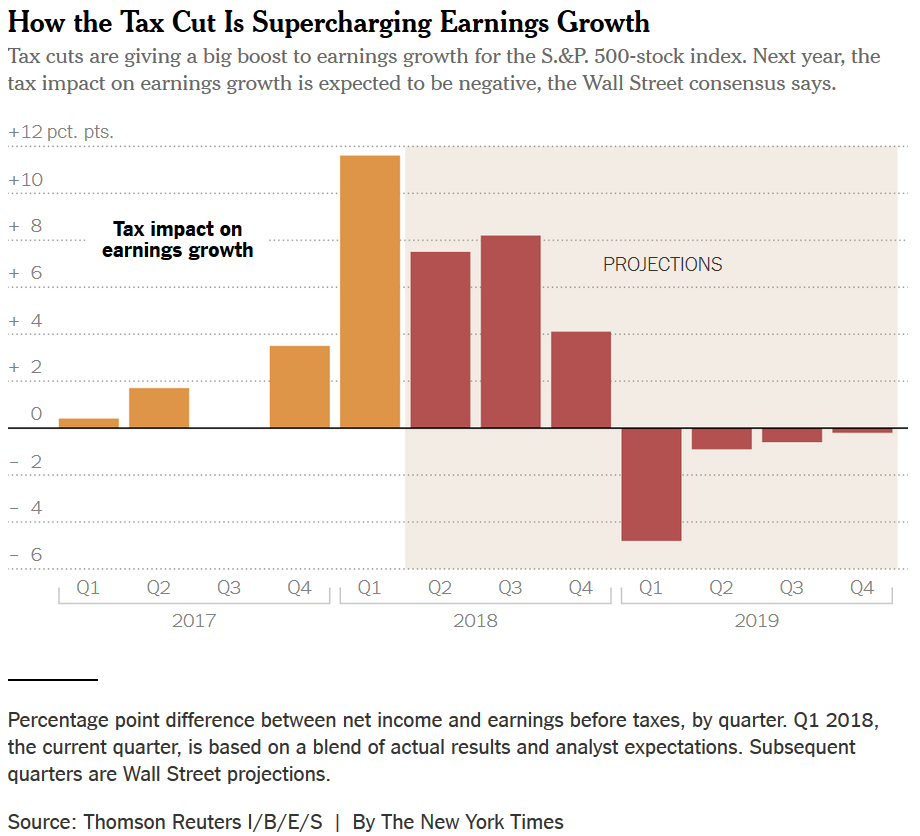 Further, while we acknowledge that a stronger dollar and weaker economies in Europe and Japan will likely drag on the corporate earnings of most “blue chip” stocks, we believe that those negatives should be largely offset by continued deregulation on the federal level and the potential for renewed investment in productivity-enhancing technology and equipment now that it can be almost instantly depreciated.

If anything, we expect that these changing fundamentals should benefit the performance of active management and stock selection versus that of investing in the unmanaged indexes.

Indeed, rather than interpreting the failure of stocks to rally over the past two earnings reporting seasons as an indication of either peak earnings or an imminent end to the bull market, we think that this break in trend was primarily a consequence of last year’s corporate tax reform.

As you will see in this chart of earnings estimates, companies have traditionally guided analysts’ estimates lower prior to each quarterly earnings period, which allowed companies to beat lowered earnings expectations, which avoided shareholder lawsuits and normally caused shares to move higher.  However, because of the anticipated impact of tax reform, earnings estimates for the fourth quarter were barely tempered and first quarter estimates were not moderated at all. 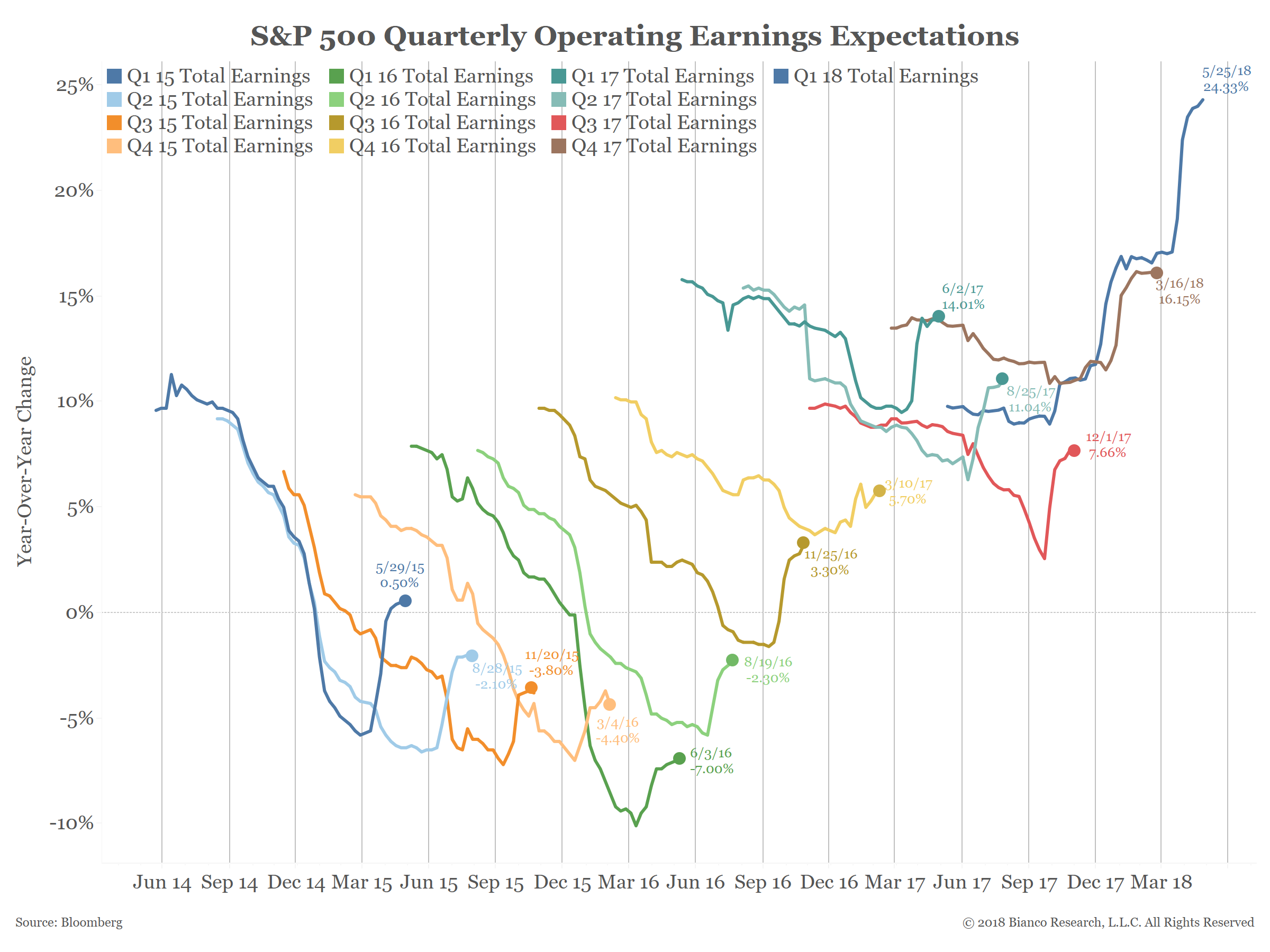 In other words, we suspect that the primary reason why equities did not experience their traditional earnings-related bounce is because the stock appreciation took place in advance of earnings announcements, and because companies did not benefit from their normal situation of having current earnings results compared against lowered earnings expectations.

That said, the perceived delay of peak earnings does not change that fact that the ongoing reversal of monetary policy from accommodative to restrictive is going to have an impact that is both pervasive and ubiquitous.  Further, that impact is almost certain to extend beyond the aforementioned global macroeconomic fundamentals all of the way down to the microeconomics of individual companies. 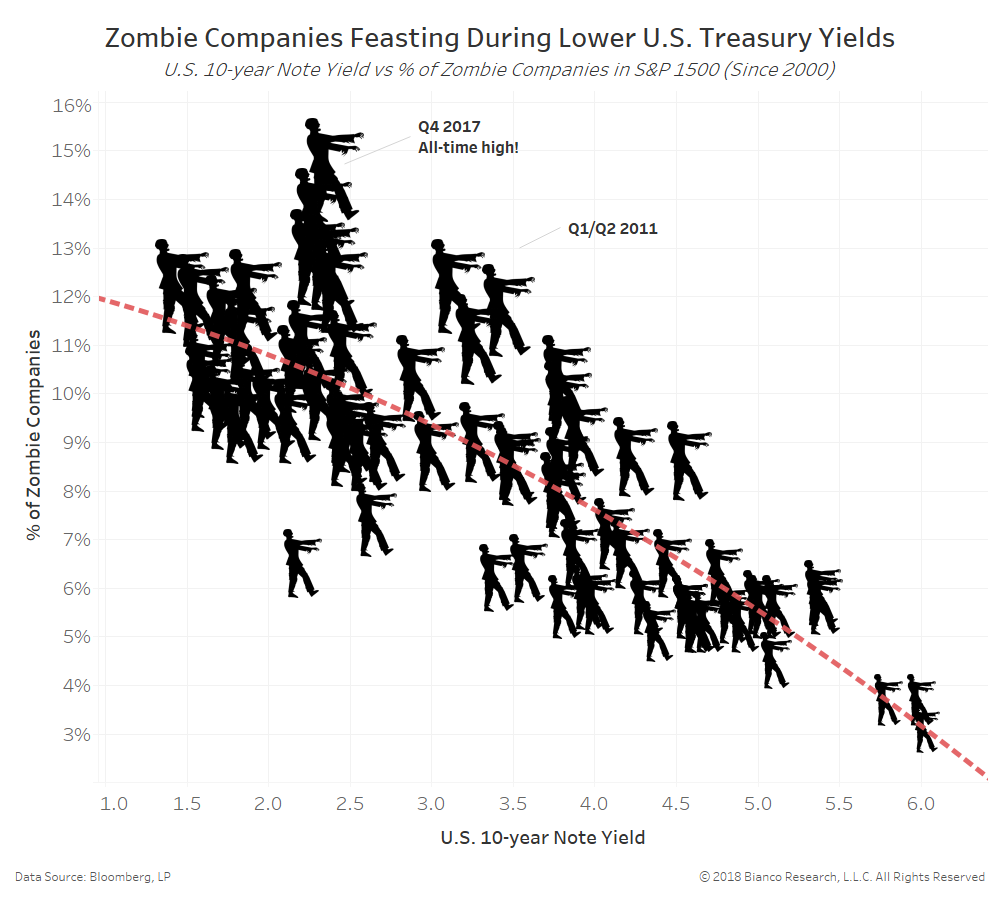 For example, if you look at the number of “zombie companies” (i.e. companies whose earnings are just barely sufficient to operate and service the interest on their debt), it currently represents over 13% of the 1,500 largest public companies listed on U.S. stock exchanges.

If you consider that extraordinary number and extrapolate it out for a year or more, earnings are expected to decline simultaneously with higher interest rates raising the cost of servicing company debt.  The eventual implications of this unwinding of monetary stimulus starts to be self-evident, as does its potential to impact companies, countries and capital markets around the globe. 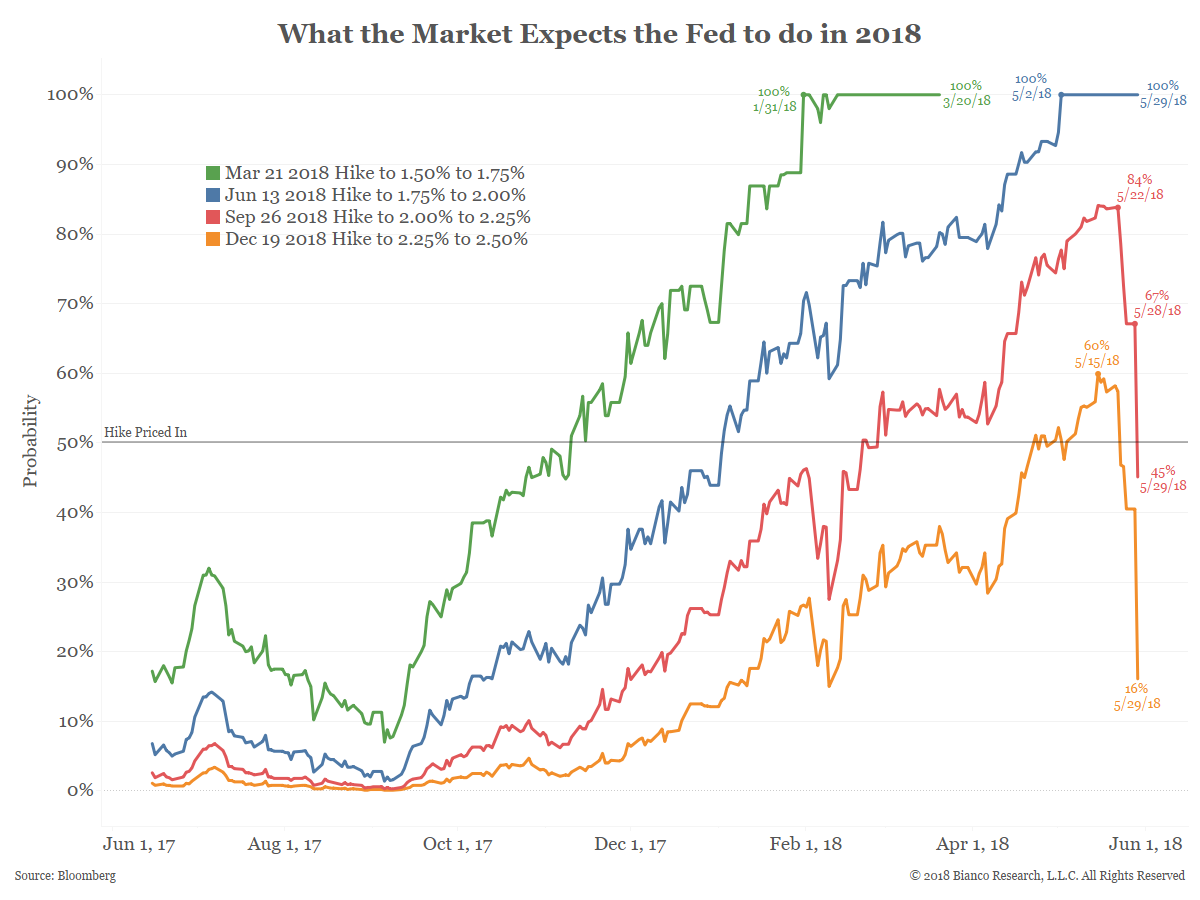 You can already see this phenomenon displayed in the futures contract for the Federal Funds Rate.  While the markets are still pricing in a 100% chance of another rate increase by the Federal Reserve in June, investors have just dramatically lowered their expectations for rate increases at the September and December Fed meetings.

While a generally slowing global economy and an over-abundance of political turmoil in Europe, South America and, to a lesser extent, Japan and the U.S. are negatives for equities over the near term, they are likely to catalyze a less aggressive round of monetary tightening than investors were pricing in as recently as a few weeks ago, and it is hard to find any single factor that has a bigger influence on equity prices than does interest rates which, in a somewhat perverse way, means that a slowing economy and increasing political turmoil should actually be somewhat bullish for both equities and debt securities over the intermediate term.

Indeed, if you examine the Wu Xia Shadow Rate, which takes into consideration both changes in interest rates and changes in the size of the Federal Reserve’s balance sheet (i.e., quantitative easing and/or quantitative tightening) in determining the level of monetary accommodation or restriction, it suggests that the Federal Reserve has already tightened by the equivalent of 4.63% (462.5 basis points), which is notably greater than they have traditionally tightened policy during recent tightening cycles, which further suggests that the Federal Reserve may already be well-advanced in its rate-hiking cycle. 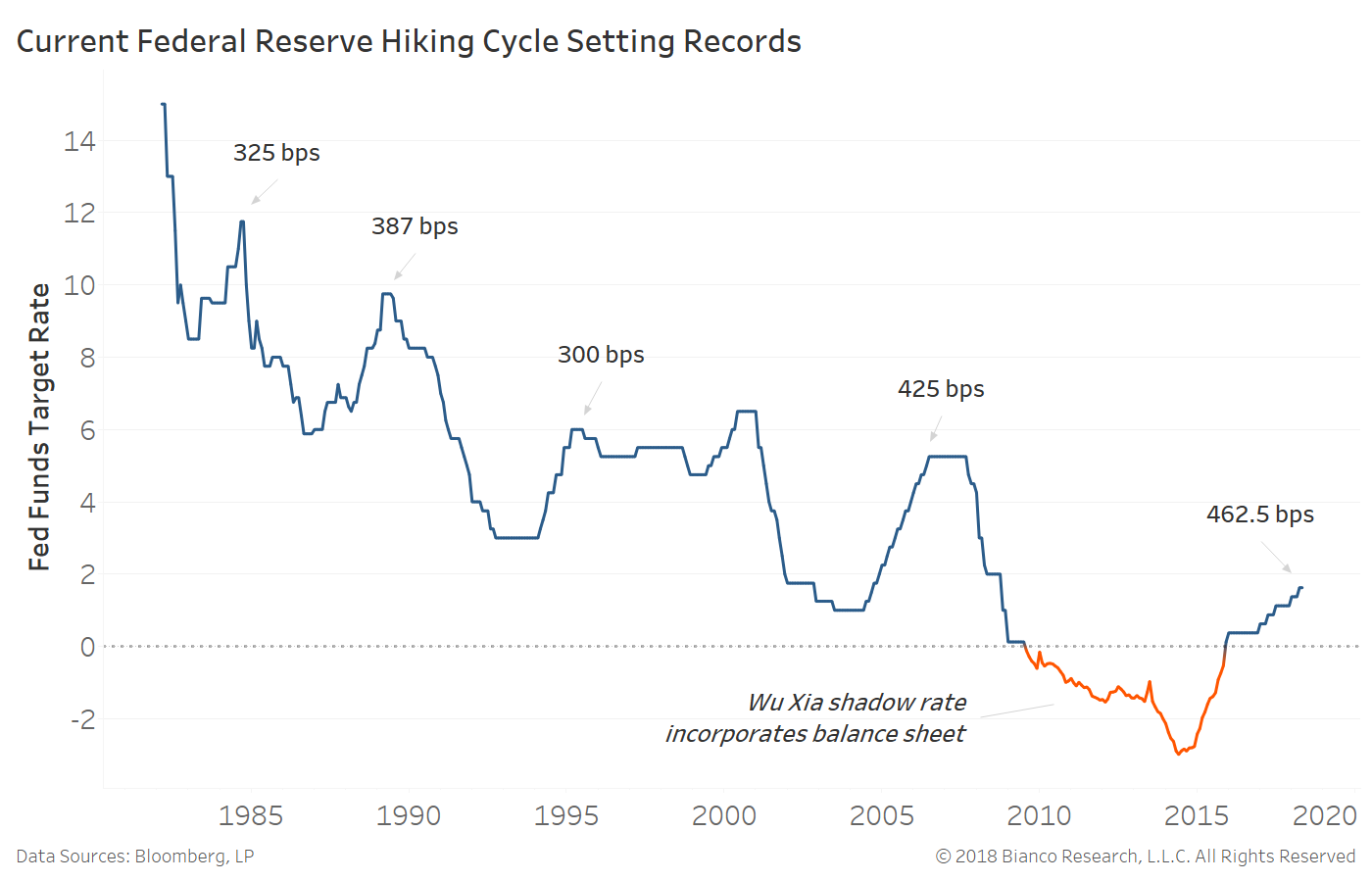 In summary, we do believe that bonds are in the midst of a modest bear market, but that they are closer to an end to that cycle than they are to the beginning.  In contrast, we believe that equities remain in a late stage bull market and continue to be among the most attractive asset classes in which to invest.  In particular, we prefer domestic equities over foreign stocks, and generally prefer investing in smaller domestic companies, as they are the primary beneficiaries of tax reform and are generally less susceptible to trade-related turmoil and future appreciation in the value of the U.S. dollar.