It is a self-evident truth that all of the components of the global economy become more and more interconnected with each passing day. An increasingly popular analogy to illustrate this interconnectedness is of an airliner with four engines (Europe, China, Japan, and the United States). 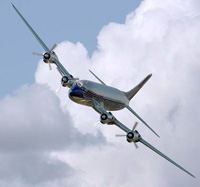 This airplane came remarkably close to crashing during the financial crisis and, if not for extraordinary, and even heroic, efforts on the part of the pilots (the world’s central bankers) and, to a much lesser extent, co-pilots (the world’s executive and legislative officials), we believe that an economic disaster would have been inevitable.

In addition to all of the quantitative easing (i.e. money and credit creation) policies being introduced by the world’s central banks, they have also driven global interest rates down to virtually 0%. Indeed, at present, 83% of all global equity market capitalism is domiciled in countries with 0% real interest rates (nominal interest rates minus inflation).

While, through these extraordinary monetary policies, a crash was averted, the airplane still suffered significant structural and mechanical damage during the decline. The China engine is losing power at an alarming rate, the Europe engine is barely operating at all, and the Japan engine, despite being rebuilt numerous times since 1989, has just slipped back into recession and is no longer providing any forward thrust. Only the U.S. engine, which is recovering from one of the worst recessions in its history, is keeping the global economy airborne.

It is no wonder that, with only one healthy and improving engine, the global economy is losing some altitude, which is manifesting itself in disinflation and even deflation.

At this point the U.S. engine has recovered so significantly that it is no longer expanding its quantitative easing programs and the American (and British) economies are even laying the groundwork for an eventual increase in interest rates. 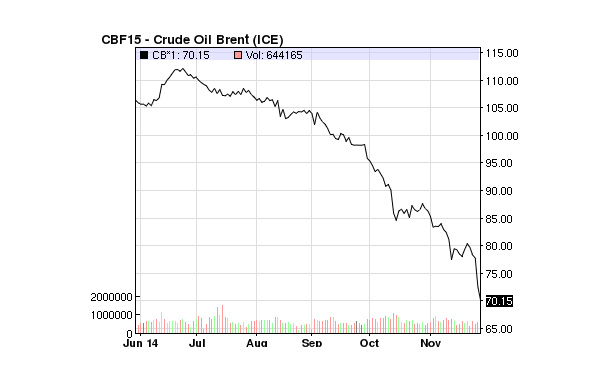 Over recent weeks, work has continued on the other three engines. China has slashed its interest rates, Europe’s quantitative easing program is finally getting underway, and Japan has called snap elections through which they hope to catalyze structural reforms in their economy.

However, the more immediate lifeline for the world’s economic airliner may come from a catalyst that was not even on the radar six months ago…a collapse in global energy prices.

It is worth noting that a drop in energy prices is not likely to produce the unmitigated benefit to the U.S. that it would have been before the American energy renaissance, when the U.S. regained its status as a major oil and natural gas producer. However, it should also be emphasized that China, Japan and Europe produce remarkably little energy (particularly relative to the size of their respective economies) and are thus among the world’s largest importers of energy. It is in this light that we expect for this collapse in crude and natural gas prices to do much to revitalize the plane’s three remaining economic engines. 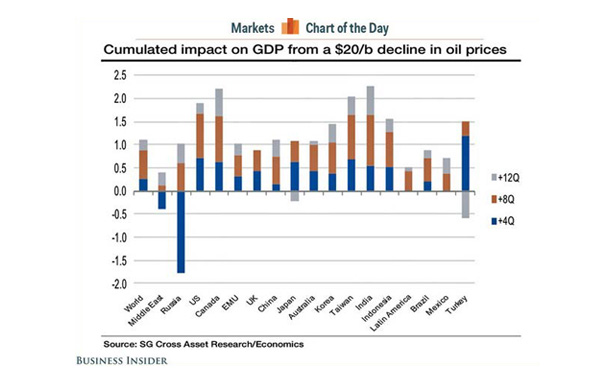 The above chart adds some perspective to this premise. It illustrates econometric estimates for how a $20 per barrel drop in oil prices affects the Gross Domestic Product (total output of all goods and services) in the major global economies one year, two years and three years after the drop in prices. It is important to note that the recent decline has actually been twice the amount illustrated above.
You will note that the greatest beneficiaries of this decline should actually be North America, the Pacific Rim (including China & Japan), Europe and India, with the biggest loser being Russia, which requires an average price of $100 per barrel to even fund its annual budget. 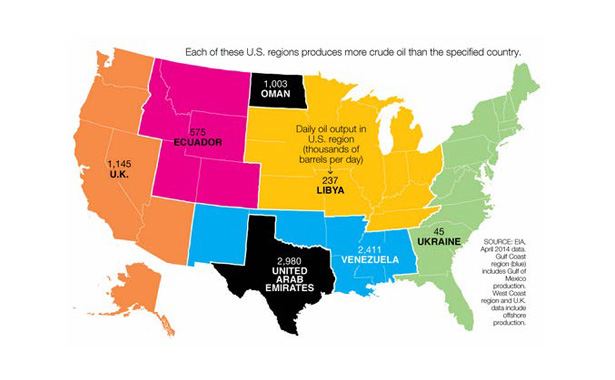 It is very important to note that, unlike quantitative easing policies, which tend to do a much better job of inflating the prices of financial assets than stimulating the real economy, a fall in energy prices should have a direct and immediate impact on both economic growth and consumer confidence.

You can already see the impact of lower energy prices on domestic consumer confidence, which has just hit its highest levels since the start of the financial crisis. This is particularly important in the United States, where consumer spending accounts for approximately 71% of the entire size of the U.S. economy. 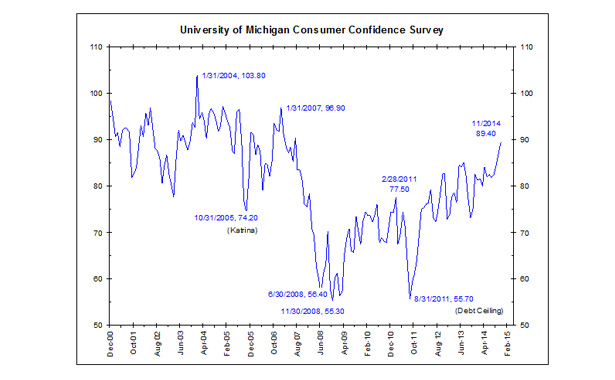 However, as noted above, lower energy prices are no longer an unmitigated benefit to the American economy now that the U.S. is such a large producer of energy. To put this point into some perspective, the below chart illustrates a very important lesson from history.

While U.S. energy production has grown dramatically in recent years, it is still not back to the levels that it reached in the 1970s and early 1980s. Importantly, in 1985, Saudi Arabia essentially crushed the U.S. energy industry when they removed caps on their production, adopted market-set pricing, and dramatically increased their production, thus making domestic energy production uncompetitive. This, in turn, caused domestic production to drop by more than 50%, which started a trend that did not reverse itself until September of 2008, when the lows for domestic energy production were reached concurrent with the devastation of Hurricane Ike and the accelerated contagion associated with the global financial crisis. 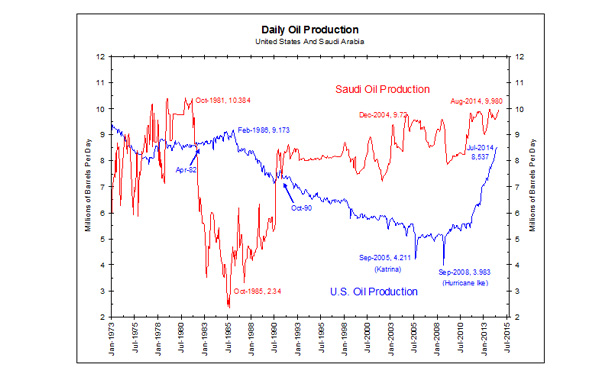 The risk is that we are seeing history repeat itself, as much of America’s domestic production is again being made non-competitive by these dramatically reduced prices (between $66 per barrel for WTI and $70 for Brent). As you can see below, this is particularly true of the shale formations that account for so much of America’s marginal increase in oil production. 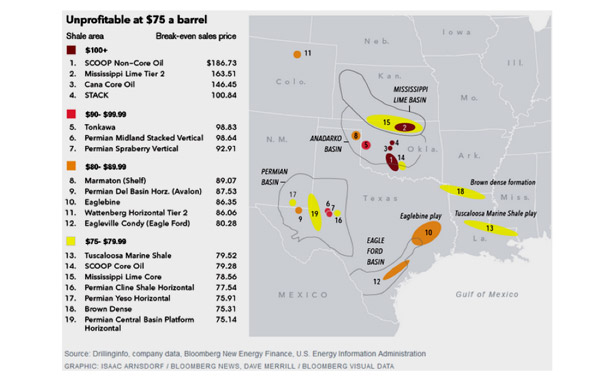 Whether O.P.E.C.’s recent decision not to curtail oil production is a confirmation that they are purposefully trying to once again use their low cost of production to decimate the newly competitive U.S. energy industry, or if it is just indicative of the fact that O.P.E.C. is now essentially impotent as a cartel because they lack the discipline and/or ability to cooperate with one another to reign in production is a point of ongoing debate. However, regardless of catalyst, the risks to the health of the domestic energy industry are very real.

The fact is that, since 2011, U.S. energy companies have invested $1.5 trillion into ramping up their operations and, according to Alliance Bernstein, they have taken on a tremendous amount of debt to do so. Debt issued by energy companies now accounts for more than 15 percent of the U.S. high-yield (“junk”) bond market, compared with less than 5 percent a decade ago.

As noted in a just-released Alliance Bernstein report,”$68 a barrel is not economical for a lot of these shale oil wells. CDS [credit default swap] spreads and yields on some of the debt are rising very quickly, because at these kinds of oil prices you are going to see producers go bankrupt.” In other words, higher prices on credit default swaps (essentially insurance policies against default) and higher bond yields (i.e. lower bond prices) are both indicative of a growing risk of bankruptcies and debt defaults in the energy industry. 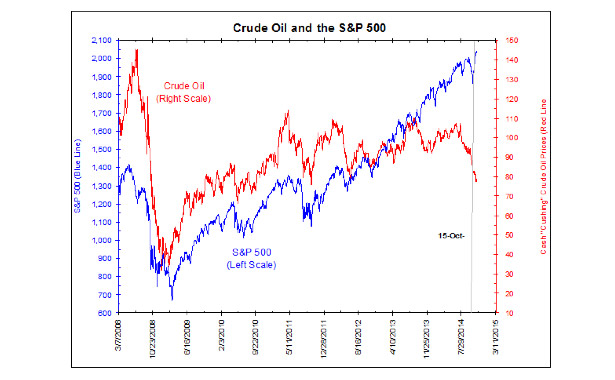 While these trends do cause us to be quite cautious on the prospects for the domestic energy sector, we would like to conclude this report with several factors that give us hope that the broad domestic equity markets will not be dragged down by losses in the energy sector. First of all, the energy sector is not as big a percentage of the general market as it was just a few years ago. Over that period, it has shrunken from representing 12% of domestic equity market capitalization to only 8% of capitalization. Second, and of even greater importance in our opinion, is the fact that the normally very tight correlation between the price of crude oil and the broad equity market (above) has diverged since the summer months, and that the divergence has become increasingly dramatic since the lows of the September to mid-October equity market correction. 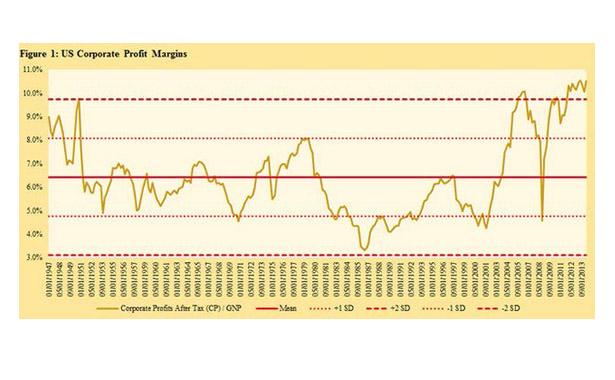 We believe that it is also very telling that profit margins for American corporations (above) have reached the highest levels since the end of World War II, and that nominal earnings and, to a lesser extent, revenues (right) have continued on their steady climb higher. 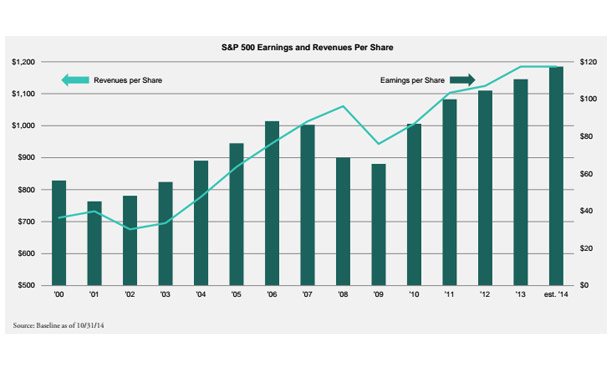 In addition, there are several seasonal patterns that have historically proven quite bullish this time of year and/or cycle. Some cyclical and seasonal patterns are very hard to explain and are probably just coincidence. For example, years ending in five are almost always positive for the equity markets and the third year of a presidential term tends to be the strongest year of the four. 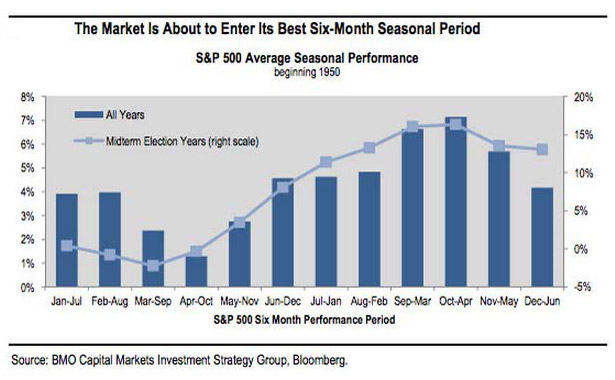 At the same time, there are seasonal patterns that, while no guarantee of future results, are much more explainable and have historically been remarkably consistent. Among those is the fact that, since 1950, the six-month mid-October to mid-April period has been more than ten times as profitable for domestic equity investors than has been the mid-April to mid-October six-month period. 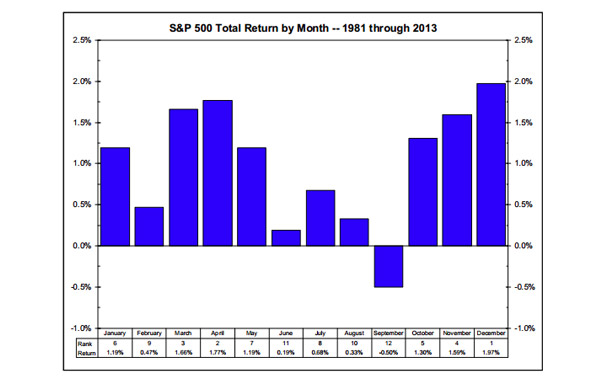 The reasons for this are quite logical, starting with the fact that there is a natural selling bias during the first half of October due to the fact that most mutual funds conclude their fiscal year in October and thus must complete any tax-loss harvesting in time for the trades to settle before the end of the month. That is followed by a normally bullish bias catalyzed by “portfolio window dressing” and end-of-year and beginning-of-year bonuses, in addition to the lump-sum funding of 401(k)s and the funding of prior year IRAs (in the January through April 15th period).

This bullish period normally ends around April 15th when investors can no longer make prior year IRA contributions and when securities often need to be sold in order to raise money to pay the April tax bill. There are other reasons for this phenomenon including the fact that the tendency is so well known that it sometimes becomes a self-fullfilling prophecy. Regardless of the catalyst, we are presently at the start of what is normally the most bullish part of the year for equity investors.