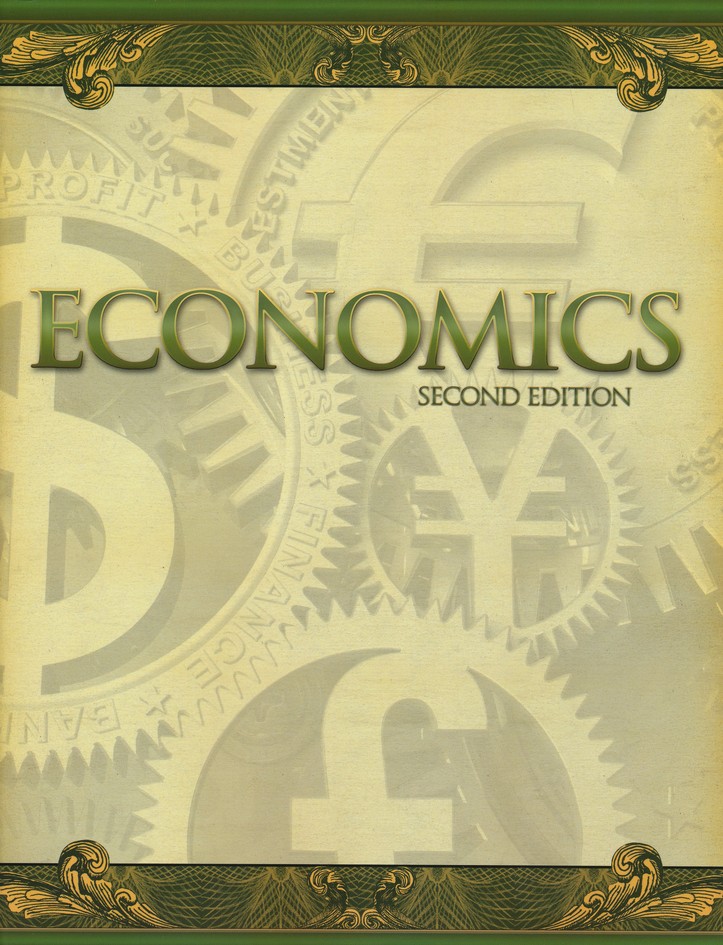 There are certain basic rules and inter-market relationships that every first-year economics student is taught as a matter of fact.  As an example, a slowing economy should lead to lower inflation, which is bullish for bonds, and to slowing earnings, which is bearish for stocks.  Or, that a stronger currency increases consumer purchasing power, which leads to lower inflation, but hurts the profits of blue chip exporting companies, by making their prices non-competitive in a global marketplace.

For the most part, the blind faith that investors and analysts have placed in these rules and relationships has proven warranted, as they do normally provide useful insight into the future course of the capital markets.

However, these baseline rules do have an inherent flaw, which is that none of their economic inputs operate in a vacuum.  This means that it is always possible, in certain unique situations, for another set of market influences to prove even more important than are the baseline rules.  This is particularly true in regard to external, non-free-market-based factors like the 1970s oil shocks and quantitative easing.

Examples of such external influences distorting the free-market pricing mechanisms and overwhelming these traditional inter-market relationships would include the period of stagflation in the 1970s, when the 1973 oil shock caused hyper-inflation despite the country being in recession.  Previously, the concept of recession combined with inflation was viewed as prohibitively counter-intuitive. 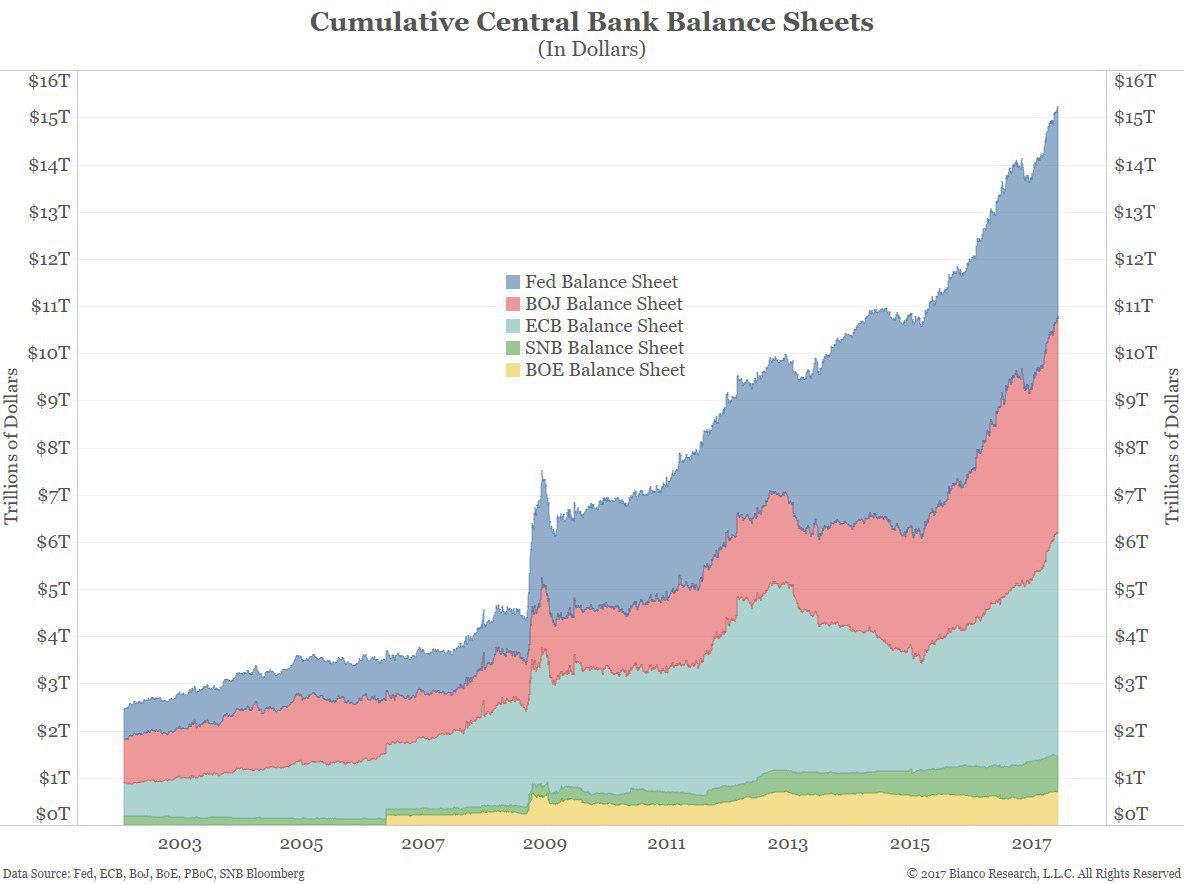 Another example of such a conundrum is the current disinflationary environment during a time of massive growth in the global money supply.  It is almost inexplicable, from a classical economic perspective, how the world’s central banks could have ballooned the world’s money supply by $15 trillion over the past eleven years and, instead of the expected result of hyper-inflation, central bankers are still battling to achieve their 2% minimum inflation target.  Meanwhile, almost 20% of all of the world’s government debt is paying a negative yield, which is, in and of itself, a bizarre phenomenon that would leave classic economists scratching their heads, and certainly would not be found in the aforementioned textbooks.

Indeed, we believe that, over the past decade, the global capital markets have been so distorted by external factors, like quantitative easing, that knowledge and training has actually worked against investors who have employed strategies based upon how markets “should” behave, according to historic precedent.  For evidence, you need look no further than the appalling relative performance of most hedge fund categories since the onset of the financial crisis, versus the S&P 500 Index in blue and global corporate bonds in red.  This is particularly noteworthy, as hedge funds are presumably run by the most gifted and sophisticated tactical managers in the world. 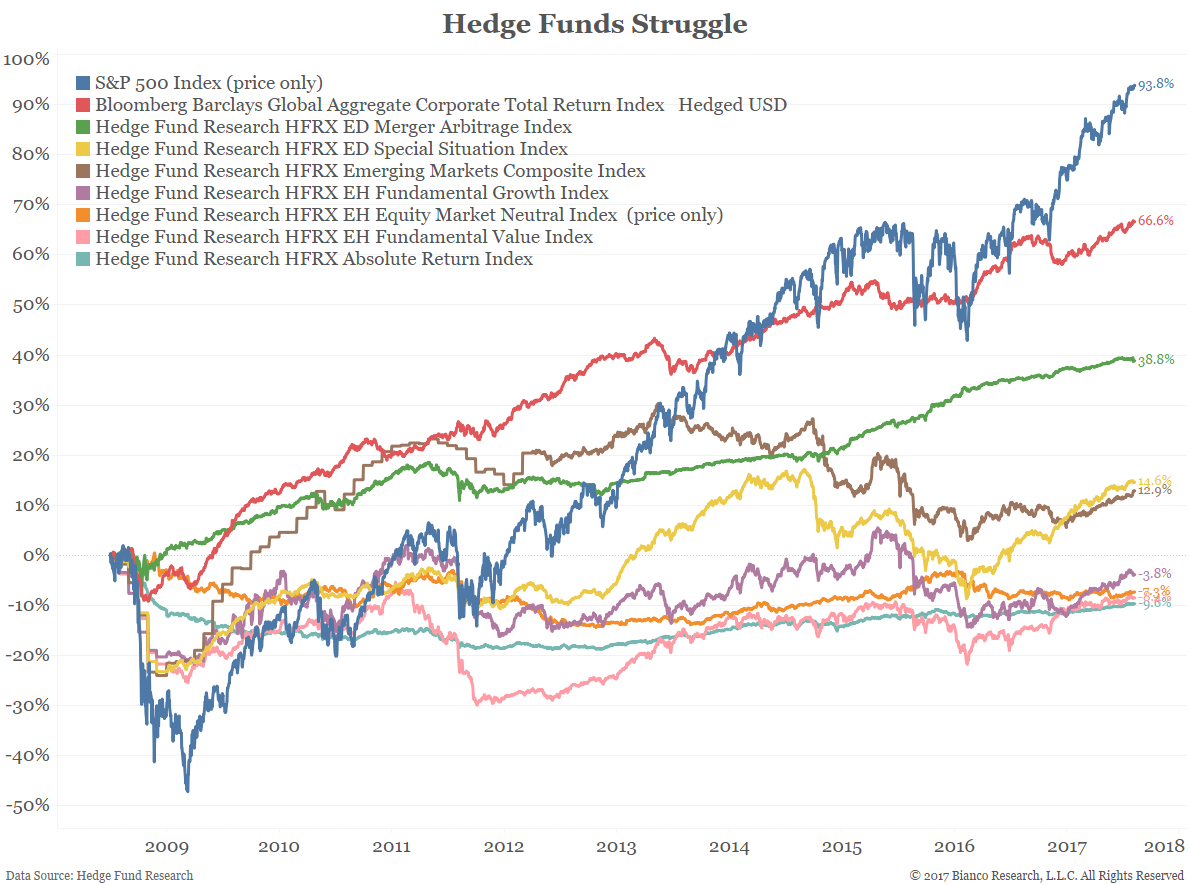 In our opinion, a growing body of evidence suggests that the markets are now exiting this rather counter-intuitive period, which would suggest that tactical decision making and active securities selection should again play an important role in enhancing both nominal and risk-adjusted market returns.  If we are correct in our premise, it would be great news for active portfolio management.

At the same time, we think that it is unrealistic to expect for these traditional guideposts to go from being largely irrelevant over the past 10 years to all of a sudden becoming a source of unquestionable market insight.  Indeed, our premise is that they will become increasingly dependable over time, as market forces become relatively more important and outside influences slowly recede but that, for the time being, this transition period may include a variety of scenarios where the message of the markets is not what it seems at first glance.

With that thought in mind, let’s start with a closer look at what might be the most commonly-held market opinion, which is that stocks are over-valued and very over-due for a correction.  On the surface, the logic behind this perspective seems quite reasonable.  After all, the current bull market in U.S. stocks is now both the longest since World War II and the second most profitable advance ever.  Moreover, this bull market has set record after record for historically low volatility, which further supports the idea that the market needs some type of dramatic sell-off to restore a healthy level of fear, and to shake out less-committed investors. 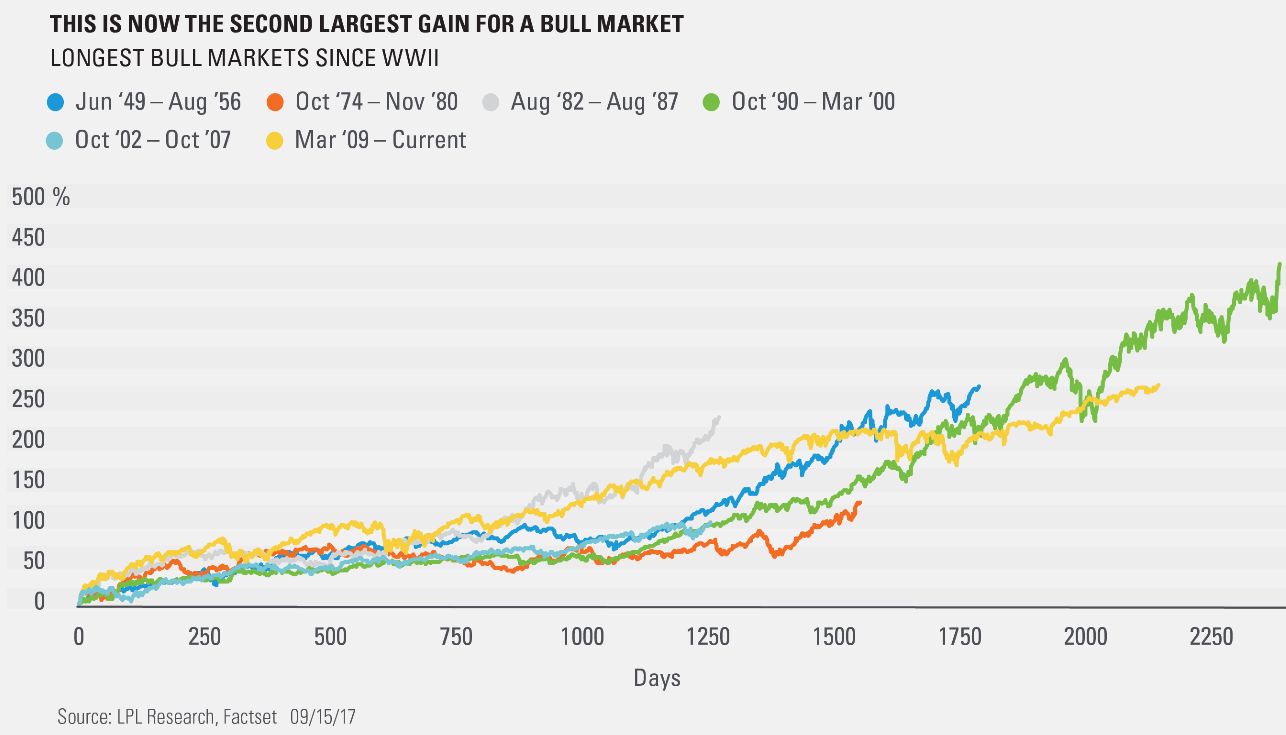 However, much like a duck sitting on a pond, the equity markets have looked calm and serene on the surface, but that image belies the dramatic churning that is taking place underneath.  You can see this reflected in the chart of market breadth, which measures what percentage of stocks are participating in the advance at any given point in time.  While the S&P 500 (black line) shows every indication of a slow and gentle meander higher, there are actually, at present, more stocks in intermediate-term downtrends than there are in uptrends. 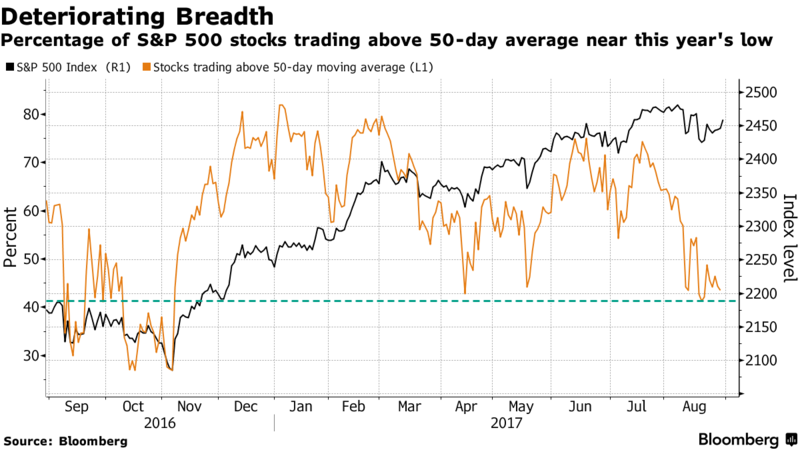 The fact is that the equity markets have been in a rolling price correction that began in earnest about a year ago, and which has, at least thus far, been fairly painless for diversified investors, as money has just rotated from group to group, but never left the market itself.  As a result, while the broad market has historically averaged one 10% or greater decline per year, it has not experienced a 3% decline since January of 2017, a 5% decline since June of 2016 or a 10% pullback since August of 2015.

Investors have rotated from small capitalization and cyclical stocks to technology and healthcare stocks, to multi-national exporting companies to financials, etc., depending on changing expectations for interest rates, tax reform, the relative value of the dollar, and so on. 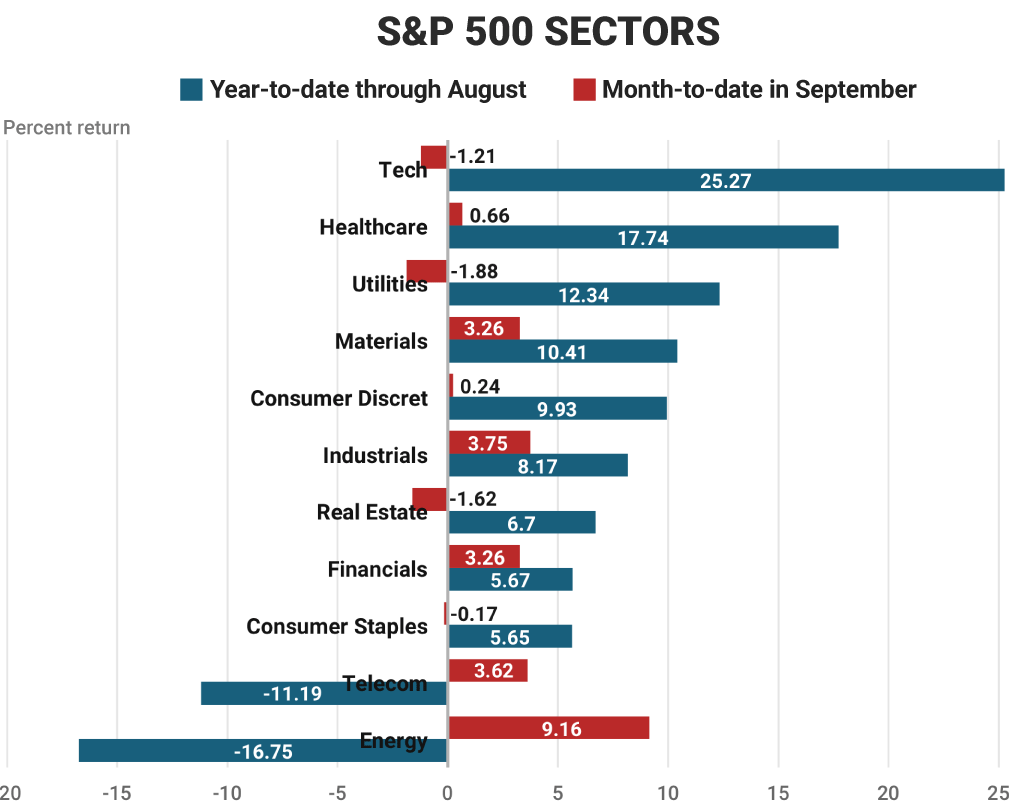 Indeed, it is possible that we are seeing yet another sector rotation just getting underway based upon the prospects for tax reform, and the tax-related trading being done by mutual funds that needs to be completed by the time that most of them conclude their fiscal year at the end of October.  The result of this churn has been that the worst performers through August have become the best performers during September, and vice versa.

This rotation in the market is quite a change from recent history.  Stocks traded in remarkably tight correlation with one another throughout the period during which the Federal Reserve was actively engaged in its quantitative easing programs (for the reasons outlined in detail in our June report, but that all started to change about a year ago, when equities increasingly started trading based upon their own unique fundamentals, as opposed to simply being moved in unison, in response to monetary policy. 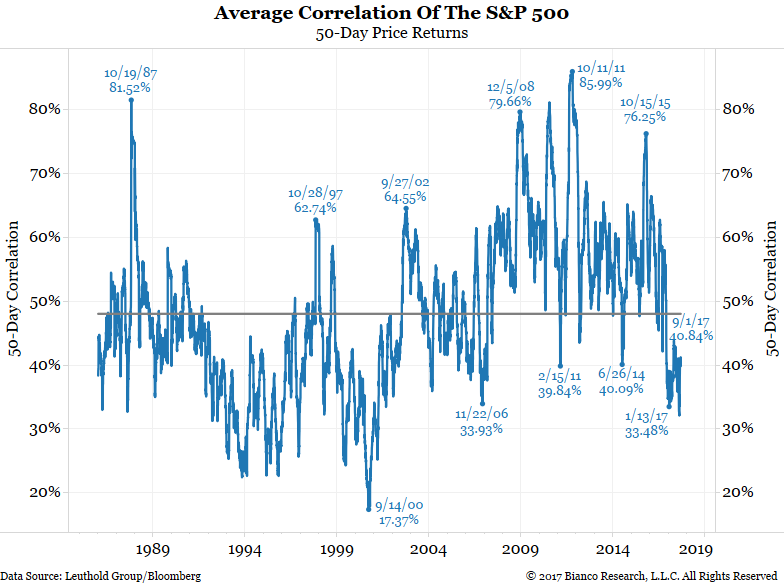 From our perspective, this is potentially quite bullish, as it suggests that free-market price discovery is finally taking place again after almost a decade of unprecedented government market intervention and distortion.  This means that securities should increasingly be rewarded or punished by the markets based upon their own fundamentals, and that money will again “flow to where it is treated best”, which should provide a very fertile environment for active securities selection and tactical management strategies to continue this year’s general outperformance over the broad markets themselves (after a decade of truly pathetic relative performance).

All of this seems both reasonable and rational to us, and shows almost no signs of the kind of irrational, crowd-driven speculation that you normally see at the end of major bull markets. 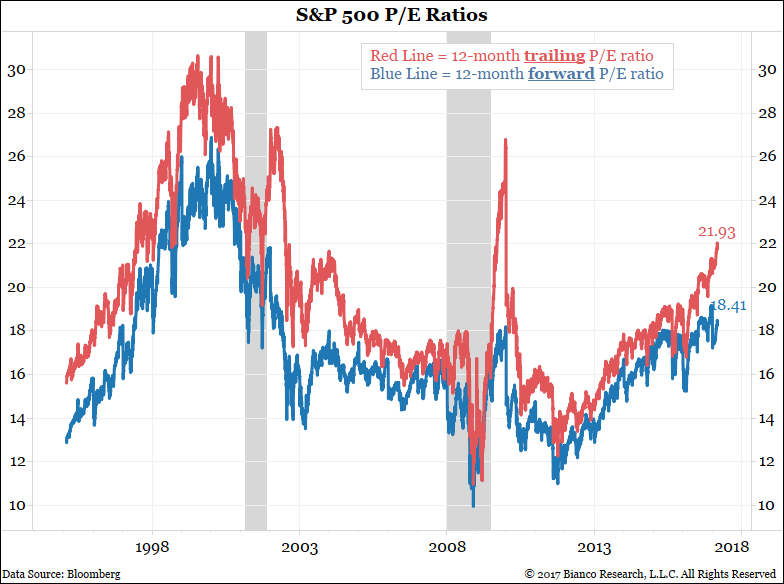 This is not to suggest that the domestic equity markets are not on the very high end of historical valuations when viewed against traditional measures like earnings per share, or that there are not some signs of speculation and complacency.

However, even these measures don’t seem to warn of anything imminent, particularly when it has historically been exuberance and complacency on the part of the small investor that has been identified with major market peaks.  Of note, what may be the best measure of small investor sentiment, The American Association of Individual Investors Sentiment Survey, is indicating that only a modest 40% of their membership currently believes that the stock market will be higher in six months than it is today. 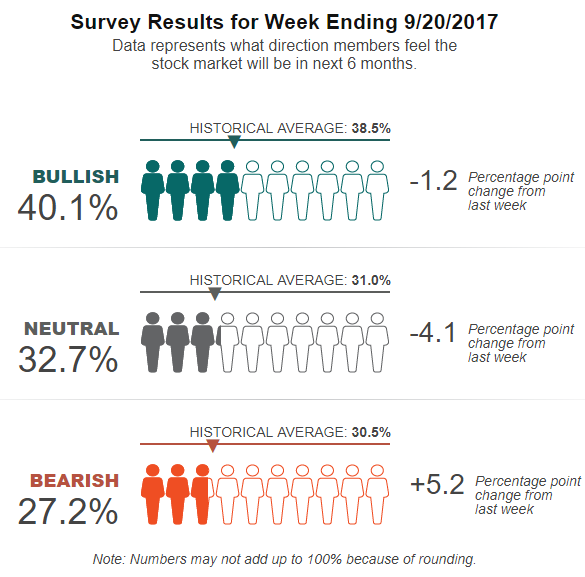 It seems a far cry from the speculative, complacent and over-confident market environment normally found at market peaks.  To the contrary, it seems like investors finally woke up to the fact that the Fed is taking the punch bowl away from the party, and that it is time to sober up and start acting rationally.

Even equity valuations, which are unquestionably lofty from a historical perspective, don’t seem so out of line when considered relative to inflation, which is a telling relationship as inflation has a large influence on almost all drivers of stock prices, ranging from earnings and interest rates to operational costs and the current value assigned to future earnings. 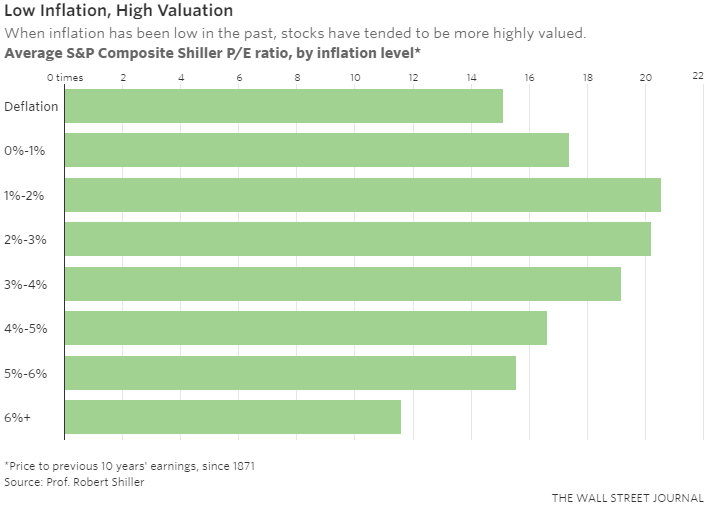 When you consider the current 1.5% to 2% inflation rate, the current price-to-earnings multiple is almost exactly in line with the average for the equity markets when at the current inflation rate.  Further, if substantive corporate tax reform actually passes, many valuations will instantaneously look much more attractive.  Even simple tax cuts should have a substantive impact on valuations, and the Republican tax plan, as currently proposed, is estimated to drop the market’s 2018 estimated price-to-earnings multiple from 21 times earnings to a more modest 17.5 times earnings.

To be clear, we understand that all bull markets come to an end, and that this one is almost certainly much closer to its end than to its beginning.  We are simply offering a reminder that, in capital markets, things are not always what they seem, and that these traditional benchmarks may prove less reliable than usual, at a time when external market influences, while slowly lessening, are still so prevalent. 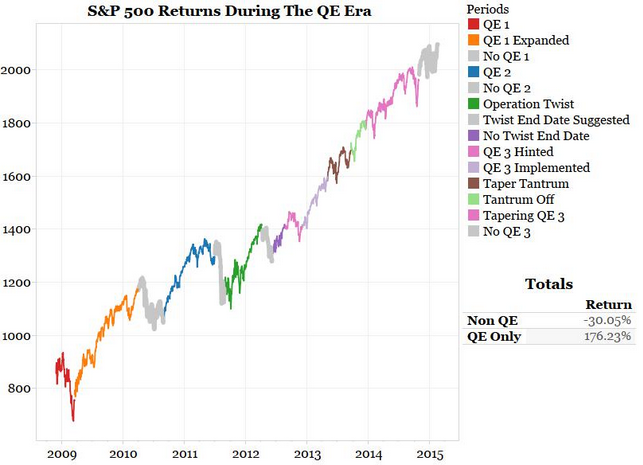 To explain, let’s go back to our economics textbook, which teaches that a significant increase in demand for anything that is of a limited supply will push the prices of that “thing” higher.  Therefore, it only makes sense that bond prices (which move in the opposite direction of interest rates) would soar higher once the Federal Reserve started adding trillions of dollars of demand into the treasury market, which has rather static supply. 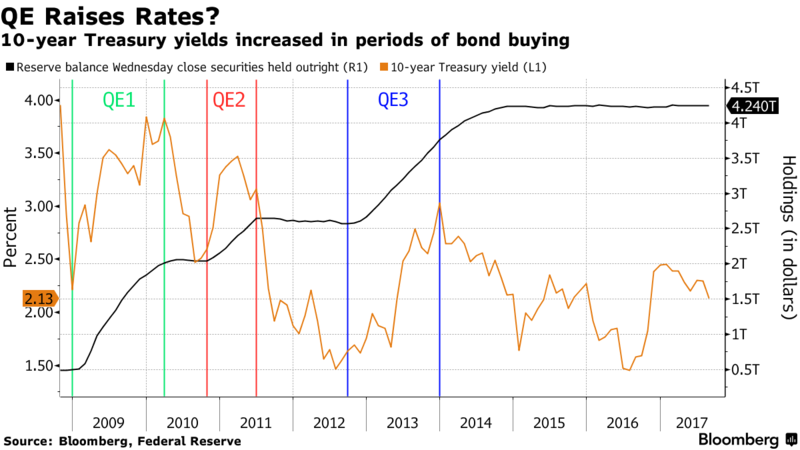 However, that’s not what happened.  In fact, the opposite happened.  During each stage of the Fed’s quantitative easing periods (Q1, Q2 & Q3), the increased demand for bonds caused interest rates to move higher and bond prices to fall, for which we can only find one explanation; that investors ignored the short-term benefit to bonds of increased demand, and instead concentrated on the longer-term benefits that quantitative easing would have on economic growth and inflation, each of which the bond markets fear.

Investors took stocks higher during those quantitative easing periods for the same reasons that they took bond prices lower.  Quantitative easing is a performance-enhancing drug, and it allowed the U.S. to shake off the two things that bond investors adore and equity investors abhor: deflation and recession.

We suspect that stocks will adjust reasonably well to quantitative tightening because it will signify that everything is returning to normal, and that the Fed’s heroic measures are no longer needed.

We believe that, while bond investors will likely face a number of very strong headwinds in the slow “normalization” of the global economy, we also think that they will be somewhat protected by the lessons of history.  Just as bond prices previously fell in response to the stimulative effects of quantitative easing, we suspect that the restrictive effects of quantitative tightening will  help to protect bonds from the two things that they fear most: an over-heating economy and inflation. 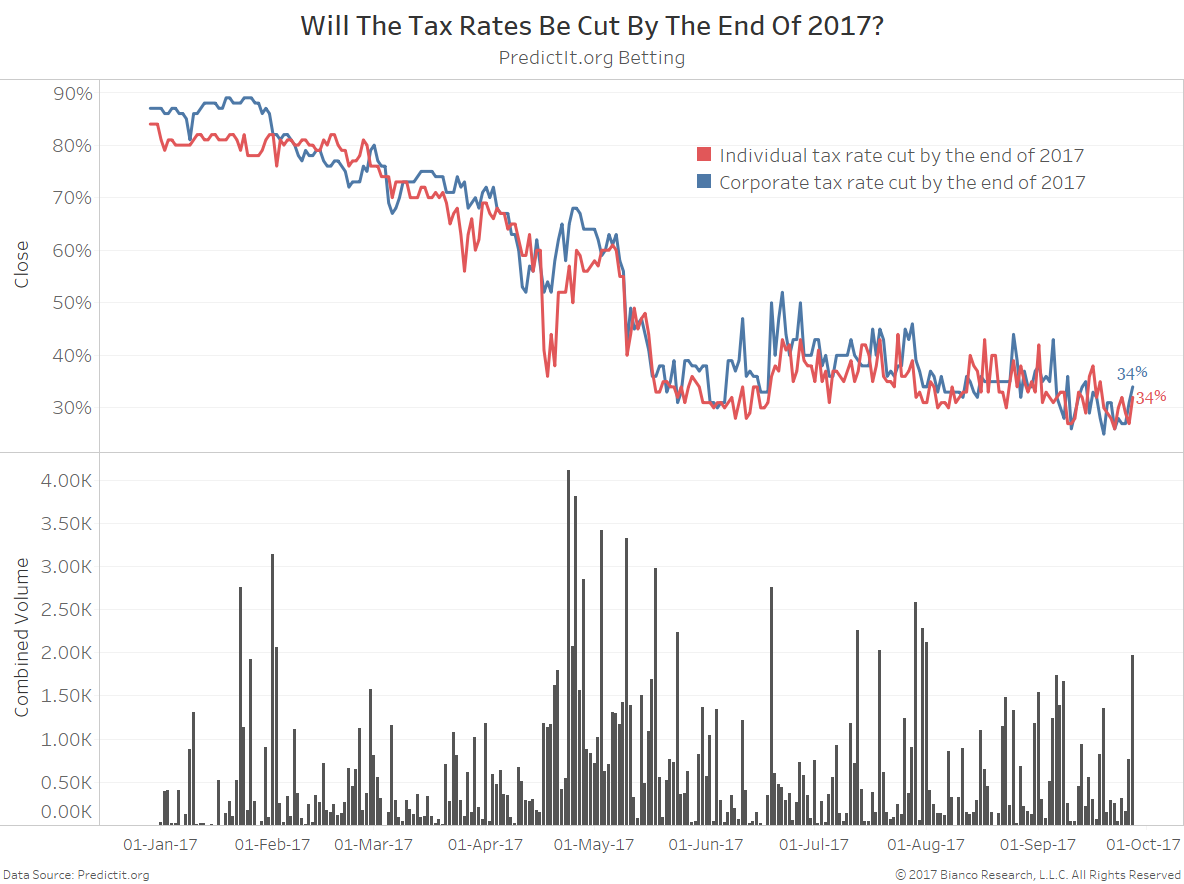 In the meantime, we are about to enter what is normally the strongest six months of the year for equities, and there are some reasonable prospects to tax reform, which do not yet appear to be reflected in stock prices, where it would be bullish, or municipal bonds, where it should be particularly bearish… but then again, things are not always what they seem.