Back in the 1980s, there was a famous credit market analyst named Ed Hart who used to speak of times and circumstances when “the demand for certainty far exceeded the available supply”.  That description applies perfectly to the current crisis in Greece due to its many moving parts, its potential for catalyzing unforeseen consequences, and its potentially vast and far-reaching aftershocks. 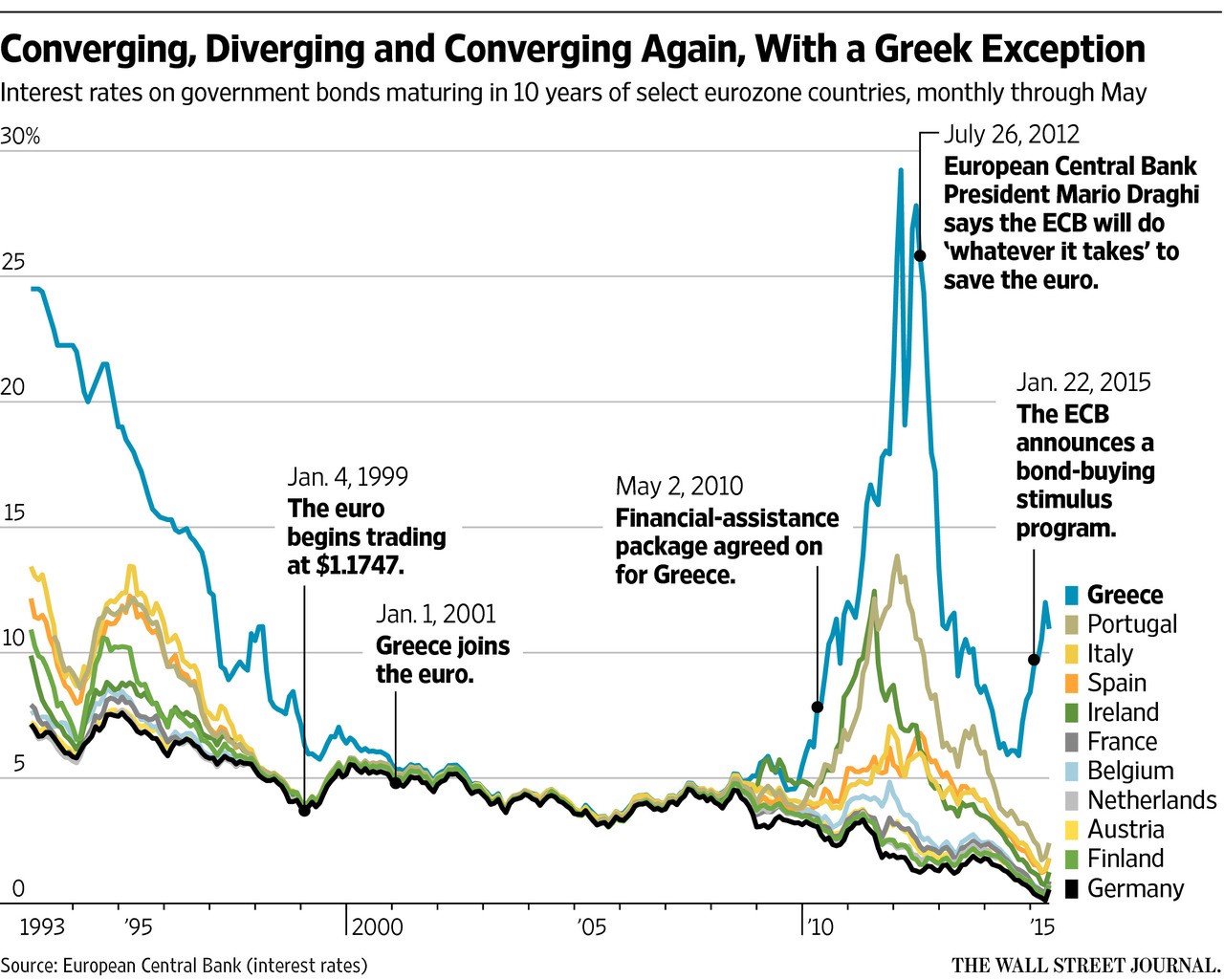 What we do know is that, at least on the surface, Greece is economically insignificant.  It has a population of only eleven million people, of whom only about one-third have jobs.  The entire Greek economy is almost exactly the size of that of Dallas, Texas or Düsseldorf, Germany.

What Greece has been is a “problem child” that wildly misrepresented information about its economy in order to gain entrance into the Eurozone, and has basically “gamed’ the European system ever since they joined.  The country has consistently spent much more than it takes in as taxes.  (Indeed, a previous Greek Finance Minister resigned last year due to a series of death threats that were made against he and his family when he actually tried to enforce the collection of taxes.)  Further, its government has been consistently corrupt and its economy is so choked by regulation and bureaucracy that it has no chance of functioning in a competitive marketplace.

It is little wonder that 61% of the country just voted for a ballot that implied no austerity, no reforms, and a promise to extort even more money from their Eurozone partners.

Greece has been allowed to persist in this behavior because it has always seemed less expensive to their Eurozone partners to essentially pay Greece not to rock the boat than to face two hard-to-quantify risks: potential chaos in the capital markets and the potential for contagion.

To explain, the Eurozone was intended to be a Gordian knot.  Once tied, it was supposed to be impossible to untie.  As such, when the Eurozone was created under the common euro currency, there were no provisions made for a country to either exit the currency union or be removed from the currency union.  With no mechanism in place, it makes a “Grexit” (a Greek exit from the union) a source of great uncertainty, and investors normally react to uncertainty by selling.

An ever greater fear is that a “Grexit” would be a precedent-setting event that would open the door to the potential exit of Italy, Spain or Portugal in the future.  The premise is that the Eurozone cannot operate as a union of convenience, where countries can join, exit, and rejoin the union at their convenience.

Both Greek Finance Minister Yanis Varoufakis, who resigned last night, and Greek Prime Minister Alexis Tsipras have very openly and quite consistently used the above-noted fears as leverage in their negotiations with the remainder of the Eurozone with all of the grace and style of a suicide bomber.  They did it again most recently with the July 5th referendum, the snap announcement of which caused a sharp, one-day decline in the capital markets.

The market reaction was probably tempered somewhat by Finance Minister Varoufakis’ resignation, which should improve considerably the tone of any future negotiations.  It was probably further mitigated by a stated willingness of the part of the European Central Bank to use its quantitative easing program to support peripheral European bond markets if needed.  This was reflected in the capital markets where global stocks and bonds both sold off on news of the referendum results, but recovered nicely as the trading day went on.

Contagion fears also seem to be very much under control, as evidenced by the fact that Italian 10-year bond yields increased by only 11 basis points to 2.36 percent, compared with a 24 basis-point increase on June 29 (the announcement of the referendum). The yield on Spanish 10-year bonds climbed 13 basis points to 2.34 percent, after also adding 24 basis points on June 29.  The reaction in currency markets was even more subdued.  After falling about 1%, the euro stabilized against the U.S. dollar to trade at $1.10.

From our perspective, each sign of financial stability weakens the hand of the Greek government and stiffens the backbone of Greece’s European partners, particularly considering the bad faith that Greece has demonstrated over the past six months of negotiating.

Even so, there have been several comments made over recent days that suggest that Greece still has some allies outside of Greece (each of which likely strengthened the “No” vote in the referendum).  This starts with a Debt Stability Report from the International Monetary Fund that was leaked just prior to the referendum, and which stated that Greece’s debt was unsustainable under almost any circumstance, and that debt write-downs would be required of Greece’s creditors if Greece were ever to get back on its feet.

It also included a statement just prior to the referendum from the President of the European Parliament, Martin Schulz, who pledged: “We won’t abandon the Greek people to their fate” and the comment from Germany’s hard-line finance minister, Wolfgang Schäuble, who very unexpectedly said the choice before Greek voters was between holding on to the euro and just being “temporarily without it”, as opposed from being permanently removed from the Eurozone, and that “it is clear that we will not leave the [Greek] people in the lurch.” 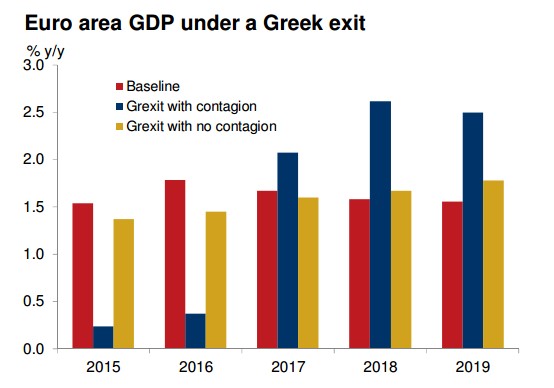 However, there are even more reasons to expect the Europeans to play hardball in any future negotiations starting with a concept called “moral hazard”.  To explain, if the Eurozone rewards Greece for its irresponsible behavior, it will set a very bad precedent for the rest of the union at a time when far-left-wing parties are gaining popularity.  The Podemos Party in Spain and the Five-Star Party in Italy are closely aligned with the ruling Greek Syriza Party, and have become increasingly emboldened to push their anti-European agenda with each Greek success.  While the Greek economy is de minimis, Spain and Italy have real economies, and a Spanish or Italian defection from the Eurozone would actually put the entire institution at serious risk.

If anything, the Eurozone’s best interest may be to make Greece suffer as much as possible, as it is hard to imagine any other country choosing to follow Greece into an economic abyss.  However, if Greece is actually allowed to improve their situation through their current tactics, one must really question the long-term sustainability of the Eurozone and its common currency.

The Greek banking system has less than €500 million of cash in reserves, and it is expected to run out of cash within a few days, unless the European Central Bank expands its emergency lending facility (ELA), which it is theoretically prohibited from doing since none of the Greek banks are currently solvent.  Since this is as much a banking crisis as it is a political one, we expect for it to resolve fairly quickly.  The most important date is probably July 20th, when Greece owes the European Central Bank (ECB) €3.46 billion.  If Greece fails to make that payment, the ECB is scheduled to cut all lines of credit to Greece, which would probably assure a Grexit and a return to the drachma.

In the meantime, we expect to see some significant volatility in the equity, debt and currency markets.  Importantly, whether we ultimately see a Grexit or not, we view any significant decline in the markets as a buying opportunity and not a replay of the 2008 Lehman Brothers bankruptcy, with all of its associated contagion risks.